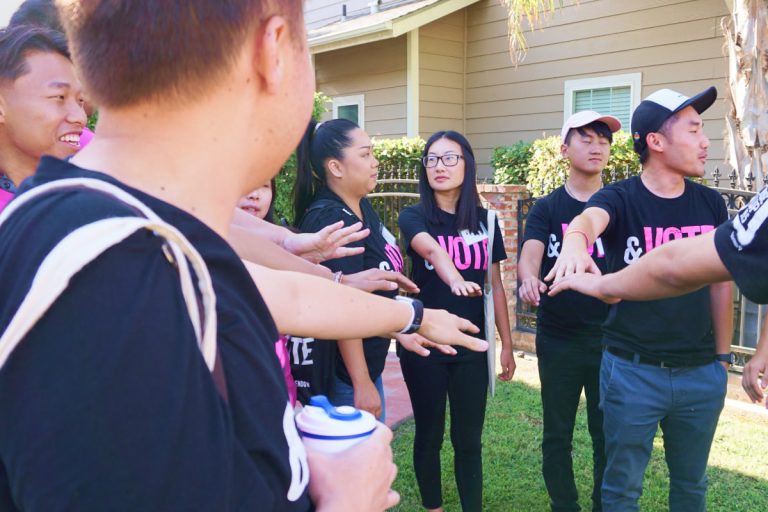 Hmong Innovating Politics volunteers get ready to canvass neighborhoods in Fresno and speak with community members about important issues.

In a sweeping pledge to advance its long-term commitment to equity and opportunity, The Kresge Foundation announced $30 million in new grant commitments to support racial justice in cities across the United States. With investments in nearly 60 local and national organizations, Kresge seeks both to fortify the ecology of national organizations working to advance racial justice and to strengthen the ability of community-led organizations in Detroit, New Orleans, Memphis and Fresno to confront racial inequities in-place.

The scale and scope of this grantmaking suite underscores Kresge’s belief that the Foundation’s efforts to fulfill its mandate – expanding opportunity in American cities – requires directly addressing longstanding and insidiously persistent systemic racism and inequality. By adding to the Foundation’s existing portfolio of anti-racism efforts, these grants represent a sharpened focus and intensification of the Foundation’s longstanding racial justice and racial equity grantmaking work.

“Our commitment to racial justice is enduring, and we at Kresge are standing with racial justice organizations as they translate mobilizing, marching and messaging into tangible progress,” said Kresge Foundation CEO and President Rip Rapson. “These new grants and social investments seek to ensure that racial justice activists and leaders have sufficient resources to make the lasting changes needed both nationally and in communities across the country. Our mission of expanding opportunity in America’s cities will not be met unless and until we contribute to building a machinery of social change rooted in the imperative of confronting and ending endemic and systemic racism. That is the explicit intent of these grants.”

Kresge’s $30 million investment comprises nearly 60 racial justice organizations that are working in urban communities and at the national level. The grants primarily provide general operating support over the next three years, representing a critical first step toward ensuring that these organizations will have significant and predictable resources as they enter the vitally critical next phase of the racial justice movement.  More than half of these organizations are entirely new grantees to the Foundation.

“Racial justice work begins in community and in place.  That is where the current spark of racial justice energies was ignited and where it will continue to take the most concrete, immediate and powerful form.  Kresge’s commitment to cities becomes a powerful platform from which to support those energies. All of our strategies, all of our tools, all of our institutional capacities must now align with them,” said Rapson.

“The Black Lives Matter movement has made abundantly clear that progress in our country requires a forthright acknowledgment of the longstanding and deeply entrenched impediments to full equality, justice and inclusion,” Rapson continued. “But it also makes clear that we must move further to dismantle – and substitute for – the insidious policies, practices, norms and attitudes embedded in virtually every facet of our society, our economics, our politics, our lives.”

“The organizations to which we lend our support today are doing that heavy lifting, and in the coming months, we will add to the cohort of organizations that we are announcing today,” he added.

These place-based and national-focused grants seek to support the following key strategies:

Faith in the Valley
Fresno, CA