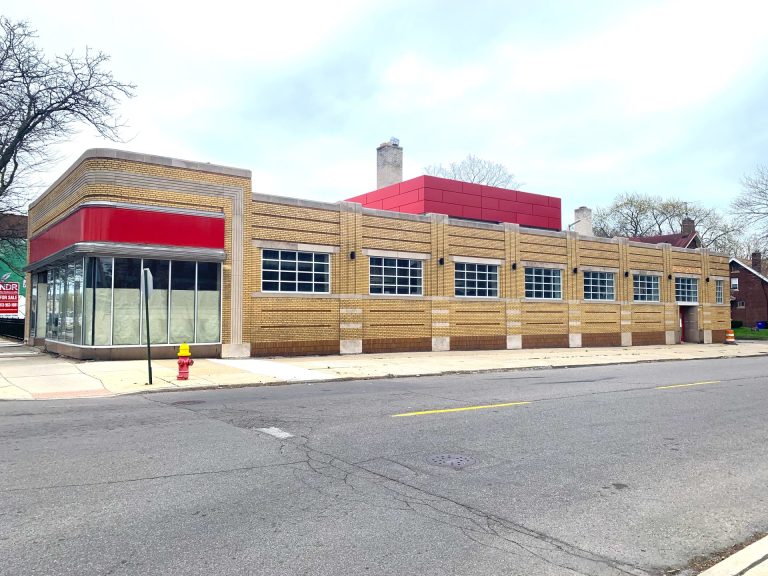 New neighborhood service hub for Jefferson East, Inc. in Detroit was once part of the S.S. Kresge department store chain.

“We are excited to announce the grand opening of the Neighborhood Resource Hub, which will serve as a home base where residents can easily access housing services, ensuring that

Detroiters have the means necessary to stay in their homes and be a part of the city’s revitalization,” said JEI CEO Josh Elling. “The opening of the hub was an effort supported by and for the community, and we are immensely grateful to the partners who helped bring our vision to life.”

The Neighborhood Resource Hub was made possible through grants and support from the Bank of America Foundation, The Kresge Foundation, AT&T, J.P. Morgan Chase, Invest Detroit, Penske Corporation, City of Detroit and the Michigan State Housing Development Authority.

The project was also funded by the Strategic Neighborhood Fund, a partnership with the City of Detroit and Invest Detroit that brings targeted investment into 10 Detroit neighborhoods and works with community residents to identify projects. The fund is supported by philanthropic support from foundations and local corporations like Penske.

“The most important work we do is keeping Detroiters in their homes,” said Mayor Mike Duggan. “While there are many great programs to help homeowners who may be struggling with their property taxes, making critical repairs, grant and loan assistance or other needs, they aren’t much good if residents don’t know how to access them. That’s why the opening of the new Jefferson East, Inc. Neighborhood Resource Hub is so important. Now, the residents of Jefferson Chalmers have a place in their own neighborhood where they can get connected to the help they need.”

On this project, EJDevCo achieved above 70 percent local contracting with Detroit-based subcontractors, which included residents from the Jefferson-Chalmers neighborhood employed directly on the site. Minority involvement in the project exceeded more than 60 percent of the workforce.

As part of the development of the Neighborhood Resource Hub, EJDevCo also installed a green stormwater parking lot, which helped to remove hundreds of thousands of gallons of rainwater during the flooding events in June 2021.

To date, EJDevCo has overseen approximately $10 million in redevelopment projects. “As developers, it is our job to ensure that redevelopment benefits everyone in the Jefferson-Chalmers community, and we’re proud to say that our work on the Neighborhood Resource Hub does just that.” said EJDevCo CEO Derric Scott.

“Our work directly contributes to JEI’s mission and together we’ve created a space where Detroiters can have access to the housing support and services they need—while generating well-paying jobs for local contractors and residents during the development process.”

“There is a powerful message of hope and renewal in this former Kresge department store building taking on new life as a resource hub for homeowners and renters, as a showpiece for inclusive redevelopment that incorporates inclusive redesign principles,” said Wendy Lewis Jackson, managing director of Kresge’s Detroit Program in release. “This will benefit a wide set of residents and help bring life back to one of the city’s re-emerging commercial corridors.”

The Kresge Foundation began in 1924, with $1.3 million from Sebastian Kresge. He established the foundation to commemorate the 25th anniversary of the S.S. Kresge department store chain (which later evolved into the Kmart chain) and to use his wealth “to leave the world a better place than I found it.” The building where the ceremony was held today reportedly was first opened as a Kresge outlet in 1926.

Over the past several years, JEI has developed one of the most impactful housing stabilization and resident services models within the City of Detroit, providing support services to more than 4,500 homeowners and renters. JEI’s team members are HUD-certified housing counselors, who offer a variety of easily accessible housing, financial empowerment, and health and safety services. Additional support provided by JEI’s Housing & Neighborhood Services team includes assisting 450 homeowners apply for 0 percent interest home repair loans—resulting in approximately 75 loan closings totaling more than $1.6 million in home repairs—and providing more than 400 individuals with housing counseling and financial education.

If you or someone you know needs housing support, please contact the Neighborhood Resource Hub at (313) 314-6415. To learn more about Jefferson East, Inc., please visit jeffersoneast.org.