Sitting for hours in waiting rooms for families with no place for young children to play. Listening to staff continually call out case numbers, not names. Telling and re-telling the same traumatic information to people in multiple departments, in multiple locations.

At just 15 years old, this was the experience that Rynn Bell encountered when she tried to get needed supports from the human services system for herself and her child.

It doesn’t have to be this way, Rynn remembered thinking. There are things we can change.

Today, Rynn uses her own experiences to help human services agencies around the country learn how they can truly engage parents and reshape how they provide services using a two generation, whole family approach. 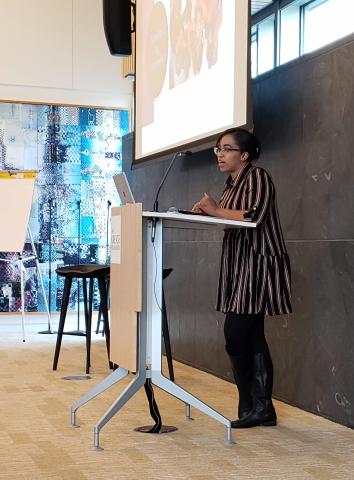 Rynn shared her journey from being served by the system to influencing the system with The Kresge Foundation and its community partners at “From Cases to Faces: One Woman’s Journey to Becoming a Systems Changer” in May.

This series is designed to highlight and lift proof points that reflect the importance of engaging families with low incomes in designing systems that benefit them and their communities, Human Services Program Managing Director Raquel Hatter said.

“No matter how much we think we know, families are the experts in their own lives,” Hatter said. “They know the realities of the system.”

Rynn was raised by her grandmother, who was also taking care of four generations all in the same household. Becoming a mother herself at age 14, Rynn realized she was trapped in a cycle of poverty.

“I had no model of what success looked like. I wanted to break the cycle, but didn’t know how,” she said.

After earning her GED, she tried enrolling in a for-profit university, which only led to her maxing out on loans. She tried cosmetology school, but realized it wasn’t the career path for her.

It was when she began volunteering in her son’s Head Start classroom that realized she had a passion for working with kids. She soon got a job as a teacher at the school and later helped create its first low stimulus therapeutic classroom for children.

While at Head Start, she connected with Jeffco Prosperity Partners in Arvada, Colorado. Developed in collaboration with Jefferson County Human Services, JPP includes more than 60 community partners that work together to support families moving from poverty to prosperity. One of Kresge’s Human Services Program’s grantee partners in its place-based ecosystems work, JPP uses a multigenerational approach, working with both children and their families or caretakers until their youngest child graduates from high school or beyond.

With JPP, coaches work with family members to identify both family and individual goals.

“It was the first time that anyone had ever asked me about my goals. And I realized that I did have goals, aspirations and dreams, but no idea how to get there,” Rynn said. “My coach helped me where I was at from day one.”

At the time, Jefferson County’s Department of Human Services was led by Lynn Johnson, who is now assistant secretary for family support at the U.S. Department of Health and Human Services. Rynn was chosen to speak on a panel about strengthening families in Washington D.C. with Johnson at Ascend at the Aspen Institute. Taking the first plane ride in her life, Rynn traveled with Lynn to Washington, D.C. in 2015 to speak publicly for the first time about her life experiences and lessons learned to a room of more than 200 people.

Despite any initial jitters, Rynn’s continued speaking, participating in discussions that helped Ascend shape practice and policy recommendations to increase access to post-secondary education for parents, including creating a lactation room for mothers, offering coaching and guidance on financial aid, and providing more flexible childcare on campus.

As difficult as it could be to share her personal struggles with strangers, Rynn realized she could use her voice as a platform to effect change.

“I realized I could be respected in the world. I have a voice,” Rynn said.

With this newly found voice, Rynn spoke at several other convenings about the barriers single parents faced and strategies to overcome them, including the 2 Gen Policymakers Institute with Ascend; Family Centered Community Change in Minneapolis, MN; Improving Outcomes for Colorado Families in Denver, CO; and Creating Effective and Efficient Systems for Families hosted by the Center for Law and Social Policy and National Governors Association in Denver, CO, just to name a few. Most recently she joined a group of parent advisors to create solutions for parents who are trying to get a degree, learn a trade or get a job at the Aspen Postsecondary Achievement for Parents Initiative and participated on a panel discussion about better ways to serve families at the Region 8 Forum on Family Homelessness hosted by the Administration for Children and Families of the U.S. Department of Health and Human Services.

Back in Colorado, Rynn worked alongside of families from Jeffco Prosperity Partners and Jefferson County Human Services to help make improvements to its own services and supports.

To start, human services staff began addressing people by their names, not case numbers. Provided a mail room for families to mail paperwork. Offered same day services so families didn’t have to make multiple visits to get what they needed. Made staff available on site at Head Start locations to help families navigate the system.

Jefferson County Mental Health extended hours for families to receive services, and increased awareness about how clients with Medicaid are treated versus clients who are not using Medicaid.

The food bank extended its hours for working families. Jefferson County Public Schools partners with families to create changes in the school district.

As the chair of the advisory board at Jeffco Prosperity Partners, Rynn collaborated with families on the board to assist in instituting changes such as establishing a welcoming committee and developing an orientation for new families.

A welcoming environment can make a big difference, Rynn said.

“It’s shaking hands with someone when you meet them, offering them water. The simple things that we all want as people,” she explained.

Rynn told the audience that one of the things she is most proud of was an idea for Jeffco Prosperity Partners to begin a speakers’ bureau for families to tell their own stories. After many conversations, she is excited that it is now in the works.

“The speaker’s bureau can help families create their own narrative. Even if they never share it publicly with others, there is something powerful in documenting your own journey,” Rynn said.

Now a parent support provider at SafeCare Colorado, through Family Tree, Rynn earned an associate degree and will be starting a bachelor’s degree program this fall.

Looking ahead, Rynn is focused on addressing several issues, including the decrease in assistance when families are on the cliff, the disconnect between wages and the cost of living and kinship services.

“We need to help families step down from the benefits cliff, not push them over the edge,” Rynn said.

She’s also committed to ensuring that multiple voices are at the table on committees and boards in communities around the country.

There are gaps, but there are a lot of people that do care, Rynn said. “We can listen, and we can listen with more intention to what families have to say and build a comprehensive whole community approach that benefits everyone involved in the process.”