“For Whom, By Whom” series explores how Creative Placemaking is playing an integral role in equitable, community-engaged development across the country

A bike trail, transformed into a community asset.  An arts-based program putting citizens returning from prison on a productive path.  A blighted freeway underpass reimagined as a hub of culture and commerce.

Each is a tale in a powerful package of stories on Creative Placemaking’s role in urban communities, authored by journalists at Next City – a nonprofit dedicated to inspiring social, economic and environmental change. The package, titled “For Whom, By Whom” – is underwritten by The Kresge Foundation’s Arts & Culture Program. 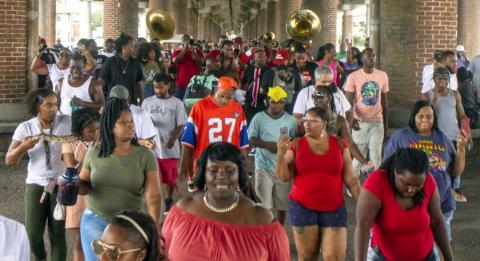 It will include 20 stories and opinion pieces on inspirational efforts to expand opportunity with residents in urban, low-income communities through Creative Placemaking – the deliberate integration of arts, culture and community-engaged design into community revitalization.

Kresge’s investment leverages Next City’s expertise and extensive history in providing in-depth coverage of equitable practices in urban development and the integration of arts and cultural components to community revitalization. It aims to reach public officials, grassroots leaders and community development professionals interested in building equity and community voices into local decision-making.

Regina Smith, managing director of the Foundation’s Arts & Culture Program, said the title of the series illustrates the questions that are essential to ask when considering how communities will grow or rebuild after years of disinvestment.

“Vibrant, successful development has its roots in engaging and reflecting the community, its values and its traditions,” said Smith. “So when considering proposed new ventures, residents need to ask, ‘for whom’ is this project benefiting, and ‘by whom’ will this work be done.”

The Creative Placemaking concept is gaining traction among community planners and urban developers according to a recent white paper, “Creative Placemaking and Expansion of Opportunity – Observations and Reflections” published by Kresge and authored by Maria Rosario Jackson, Ph.D., senior advisor to the foundation’s Arts & Culture Program.

“At its best, Creative Placemaking builds on a community’s cultural assets and leads to healthier places where all people, particularly those from historically marginalized communities, can thrive,” reads the paper. “It helps to elevate, shape and sometimes transform the physical, social, cultural and economic qualities of neighborhoods. It is fueled by the imagination of community residents and stakeholders, artists, designers and culture bearers often working along with community developers, urban planners and people from other fields.”