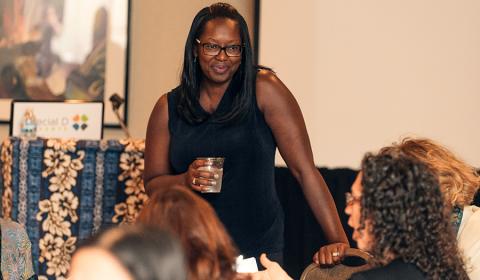 Kresge Senior Program Officer Jalonne White-Newsome has been awarded “Advocate of the Year” by one of Michigan’s leading environmental policy organizations. The Michigan League of Conservation Voters (MLCV) will bestow the award on White-Newsome at a ceremony on Oct. 5 in Detroit.

White-Newsome oversees the Kresge Environment Program’s Climate Resilient & Equitable Water Systems (CREWS) grant portfolio and leads the foundation’s work addressing the intersection of climate change and public health. Prior to joining Kresge in early 2016 she served as director of federal policy at West Harlem Environmental Action Inc. (WE ACT), where she was involved with leading national campaigns and a 42-member national coalition of environmental justice organizations. Her work helped ensure that the concerns of low-income communities of color were integrated into federal policy, particularly on clean air, climate change and health issues.

Lisa Wozniak, executive director of the MLCV, said White-Newsome’s work on behalf of underrepresented communities of color and all Michiganders was exemplary.

“Her work to integrate environmental justice into federal policy was groundbreaking,” said Wozniak. “She continues to pioneer innovative ways to ensure that people in at-risk communities have clean water, fresh air and healthy neighborhoods.”

Past winners of MLCV’s advocate award include: Dr. Monna Hanna-Attisha, who was instrumental in exposing the Flint, Michigan, lead-tainted water crisis; the Detroit Zoological Society for its commitment to sustainability and animal welfare; the Anglers of the Au Sable for protecting Michigan’s signature cold-water trout stream; and Dr. John Hartig, manager of the Detroit River International Wildlife Refuge for decades of conservation work.

Two other awardees will share the stage with White-Newsome. DTE Energy will receive the league’s Business Leader of the Year” award and State Representative Stephanie Chang earned Legislator of the Year.

A Detroit native, White-Newsome earned a Ph.D. in environmental health sciences from the University of Michigan School of Public Health, a master’s degree in environmental engineering from Southern Methodist University and a bachelor’s degree in chemical engineering from Northwestern University. She serves on the board of US Climate Action Network, and is a member of the steering committee of the Health Environmental Funder’s Network. Jalonne is a 2017 PLACES Fellow with The Funders Network.

She is an adjunct professor at The George Washington University in Washington, D.C., and continues to engage in research on climate, health and equity.  She was recently appointed to be a member of the National Academy of Sciences Board on Environmental Change and Society, and is serving as a lead author for the human health chapter for the fourth National Climate Assessment.