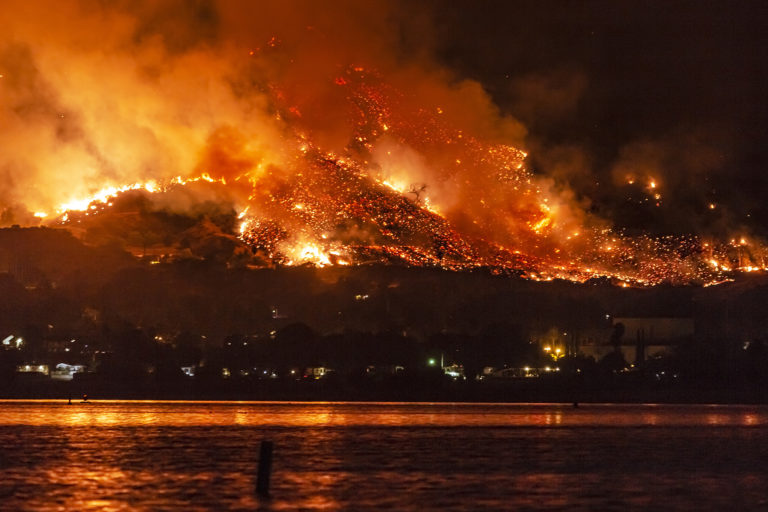 Wildfire near Lake Elsinore, California. (Photo by By Kevin Key)

Addressing the cascading effect of our warming planet is essential to prevent future calamity.

As we witness the horrific wildfires ravaging Washington, Oregon and California, the question of interconnections is becoming ever more relevant.

We are accustomed to thinking about these terrifying and sobering events as discrete acts of devastation, occurring one at a time – we send time and time again our hearts out to the particular residents, first-responders, homes, animals and wildlife at risk.

But, as The New York Times reported last week, we may no longer be able to afford to think of them this way. We instead have to begin coming to terms with the enormously complex ways in which they are interrelated – a convergence of causes and effects. Scientists call it “the cascade effect” – disasters layering one upon another, creating a chain reaction in which one after another precipitates, accelerates, or otherwise exacerbates the next, in an ever-rising crescendo of severity.

Climate change is the central driver. It is as straight-forward as it has been tragic. As temperatures increase, our forests dehydrate. As they lose their moisture, they are easier to burn. So, the West’s unprecedentedly hot summer was an invitation to catastrophe – the worst wildfire season on record. One record-setting fire after another.

The cascade effect suggests, however, that other vectors are involved than simply this year’s dry summer.

Looking back, California’s drought of 2017 contributed significantly to the death of more than 150 million trees. That’s a whole lot of kindling sitting on the forest floor. Indeed, the fastest moving fires of the last months have been in exactly those places with the highest concentration of dead trees.

But that presence of fuel was in turn the result of additional complicating factors.

First, forest management practices. Not simply “cleaning your floor,” as President Donald Trump would have it. But also the suppression of natural fires. Fire is nature’s method of rejuvenating her forests. If we don’t properly prepare for this natural regeneration, which is inevitably impacted by climate change, we get exactly the kind of fuel build-up that cascades the frequency and intensity of fires. This is really hard to get one’s head around, because it is so scary, indeed unimaginable. That horse has long since left the barn – there would appear to be no turning back. Faced with current settlement patterns, it is inconceivable that we would let fires burn.

The second complicating factor is exactly what I just noted: human settlement patterns. We can construct nonflammable roofs, “secure a home’s perimeter” by creating clear space for fire breaks and organize neighborhood fire preparation clubs. But we are putting ourselves in harm’s way by living in forests and mountains with the kind of conditions that now prevail.  More than 350,000 California residents live in towns or settlements within zones designated as extremely high risk of fire, and another 2.3 million live within fire hazard zones of lesser, but still serious, risk. Talk about the horse having left the barn – it is unlikely that people won’t continue to live in these places. But, our decisions come with consequences: all it takes is a lightning strike, a spark from an electrical line, a floating ember from a backyard firepit, or a short in your house’s wiring.

So, the cascade effect traces back to the precursors of today’s fires. Let’s add to that the effect’s forward-facing aspects.

Looking to the future, we will – without question – increasingly experience fast-spreading, large-scale fires burning simultaneously – with all of the pain and loss that accompanies that. And that doesn’t even include power blackouts, insurance retrenchment and rebuilding costs. But we unfortunately have to add to the dominos that will fall another consequence too often overlooked: health impairments.

We all have seen images of the horrifyingly orange air. We know that ash particulate can pose serious threats to even the healthiest among our citizens, to say nothing of those with asthma or other respiratory or heart challenges. And burned homes can cause dangerous chemicals to leach into the ground water, reservoirs, and water system infrastructure. So, imagine how this plays out in the time of COVID. Assaults on our lungs and hearts and digestive systems, all tangled up in one huge package of harm multiplication.

It’s fair to ask what the point is of all this. Simply, the same point that Kresge’s Environment Program team has been making since they began their climate change work more than a decade ago – that we need to anticipate the future as we navigate the present . . .  that we have to use that knowledge of future effects to prevent those impacts that are within our power to change . . . that we have to put in place measures capable of adapting to those harms no longer within our power to prevent.

Simply put: We must prepare for the effects of climate change that cannot be avoided. By factoring climate change into decisions about infrastructure, land-use, public health and other planning issues, we can help to make cities stronger and more equitable.

The problem is, we’re not very good at any of this – our Environment team notwithstanding. And every time we fail to rise to the occasion, we worsen the cascade – altering the balance of the whole.

On the one hand, these times are already too nightmarish for us to be thinking about this. Our prayers go out to those in California, Oregon and Washington. On the other hand, however, if this is truly an inflection point, there may not be a better time to think about what happens when systems intersect.