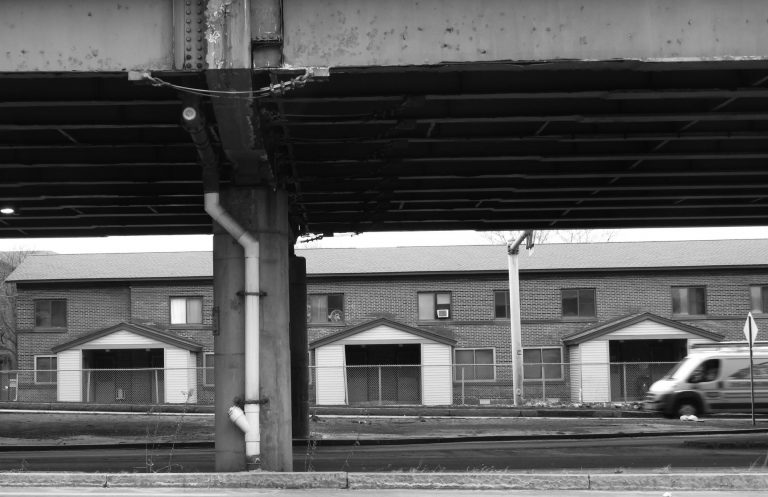 I-81 facilitated commuting in and out of Syracuse at the expense of the communities that it divided. The Pioneer Homes can be see just beyond the expressway. Photo by Lawrence Davis.

More than half a century after its construction wreaked havoc on Black neighborhoods in Syracuse, the I-81 stretch of the U.S. interstate system is due for replacement by the state of New York. Meanwhile, a separate effort titled  Blueprint 15 seeks to redevelop public housing in a nearby historically Black and low-income neighborhood.

What comes next opens a number of questions about the past and the future that are far from unique to Syracuse. “The spine of America — its railroads, runways and highways — was often literally built on top of Black neighborhoods. Many of those communities had been segregated as a result of redlining and blighted because of a lack of credit. In the 1950s, they were destroyed in the name of urban renewal,” the Washington Post wrote in a 2019 examination of the history and future of I-81. “More than a half-century later, some of those runways and highways are crumbling beyond repair. In Syracuse, residents are trying to leverage officials’ desire to do something about their old road into an opportunity to repair ills of the past,” the Post continued.

The issues around housing, urban design and social and economic justice related to I-81 and adjacent redevelopment efforts came to the fore recently in “Charting Renewal: A Forum on Housing Redevelopment, Social Justice and the Replacement of I-81,” part of the City Scripts discussion series, a partnership between the Syracuse University School of Architecture and the university’s Maxwell School of Citizenship and Public Affairs.

The forum was moderated by Spectrum News anchor Devon Patton with panelists:

The City Scripts partners hope their collaboration will help to ensure that inclusive policy and design are at the forefront of challenges facing cities in the United States and around the world. The conversation, came just a few short days after the Biden administration released the American Jobs Plan, which intends to rebuild the country’s public and economic infrastructure with plans to address historical inequities of urban renewal. The plan speaks to these inequities in interstate systems such as Syracuse’s I-81 stating, “Too often, past transportation and investments divided communities – like the Claiborne Expressway in New Orleans or I-81 in Syracuse – or it left out the people in most need of affordable transportation options.”

During the panel discussion Chaplin and Washington spoke to the crucial need to provide the historically Black population impacted by the development efforts, with the resources, technical assistance and power to make decisions of what happens to the land once the I-81 viaduct is removed and public housing renters are displaced. Models such as community land trusts could be important tools for residents going forward, they said.

Cohen and Vale, both housing experts, spoke to the history of urban renewal across America’s cities and what developers, city government and policy makers can learn from the mistakes of the past. They spoke to the need to co-design development efforts with community, preservation of local assets, and the complexities supporting residents in returning post-development.

The Charting Renewal forum was supported by The Kresge Foundation’s American Cities Program.  The forum created a dialogue on Syracuse’s public housing and infrastructure issues among and between residents, local leaders, city government and national experts on the history of urban renewal in historically Black, Indigenous and other communities  color. To watch a recording of the Charting Renewal forum, please see the link here.