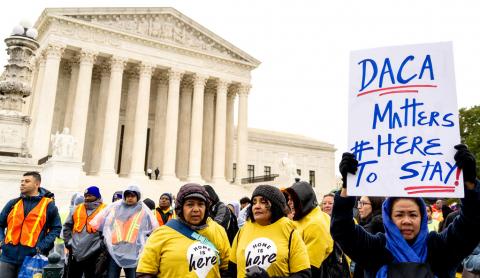 “The Kresge Foundation applauds the U.S. Supreme Court’s decision to strike down the Trump administration’s efforts to dismantle the Deferred Action for Childhood Arrivals (DACA) program. Today’s ruling is a victory for the nearly 700,000 immigrants who came to the United States as children and have known no other home. We also celebrate the activists and Dreamers who worked tirelessly to defend DACA.

For many years, our organization has sought to expand opportunity in cities, to reinforce cities as places of cultural, economic and personal growth and innovation. Immigrants are essential to the advancement, reinvention and future of our great cities.

Today’s decision was the right one and reaffirms a fundamental truth about the United States – that immigrants helped build this country and who will continue to help sustain it for generations to come.”

Photo: “DACA rally” by vpickering is licensed under CC BY-NC-ND 2.0

We stand with DREAMers