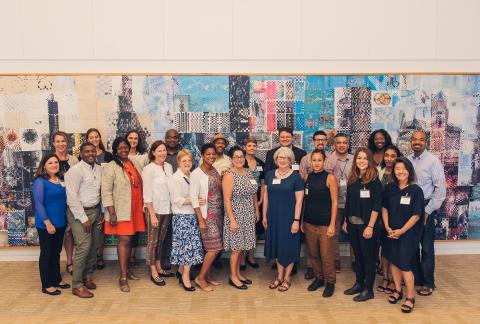 Integrating racial equity and social justice through environmental philanthropy is the goal of a convening of grantmaking leaders recently at The Kresge Foundation.

The late July meeting was part of a professional development series supported by Kresge as well as the Hewlett, Schmidt, Packard and Energy foundations. Titled InDEEP (Inclusion, Diversity and Equity in the Environmental Philanthropy), the series seeks to engage foundation staff and senior leaders in developing strategies to strengthen the environmental field’s inclusiveness and diversity.

Lack of diversity is a longstanding problem in the environmental field. A survey conducted by Green 2.0 found that only 16 percent of staff at environmentally-focused nonprofits, foundations and government agencies are persons of color – compared to 36 percent of the US population.

“Achieving equitable environmental policies and outcomes for all Americans requires meaningful engagement with those who are most affected by those decisions,” said Shamar Bibbins, a program officer with Kresge’s Environment Program and coordinator of the convening. “These and many other funders are committed to working toward the goal of seeing people of color and other underserved populations better represented on the boards, staffs and in leadership positions of organizations in the environmental field. InDEEP provides a space for learning, goal setting, and peer-to-peer exchange so that funders can be change agents to shift grantmaking practice to more equitable outcomes.”

The InDEEP hosts in-person gatherings twice a year as well as a series of webinars in conjunction with environmental affinity groups to sustain discussion and education around diversity and equity issues in the environmental field.