Count every vote, elevate long-term good, and use this moment to mend 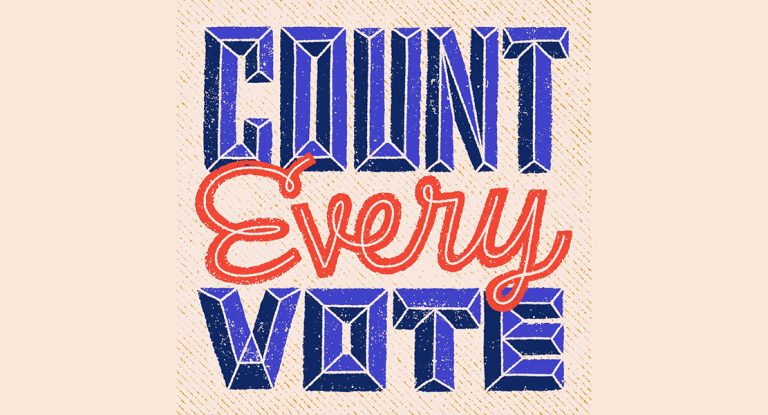 Statement on the 2020 Presidential Election

The United States was founded on the revolutionary concept of representative democracy, of a democratic republic. It is a construct that has solidified over the course of two-and-a-half centuries into this country’s essential bedrock . . . that has inspired countless fledgling democratic movements across the globe . . . and that has resisted the assaults of illiberalism, McCarthyism, apathy and countless other anti-democratic impulses.

Although it is maddingly imperfect, mired in inertias and too episodic and incomplete in its embrace of equality and justice, it is an idea whose promise guides us through an election season like this – an election season unprecedented in its complexity, its vulnerability to disruption, its fragility in the face of insidious suppression of the franchise, its susceptibility to the poisonous effects of misinformation.

People setting up lawn chairs to get them through five-hour waits in voting lines. People redefining voter mobilization through online platforms of mind-numbing sophistication. People knocking on doors when the simple possibility of that door opening threatens their health. People traveling tens of miles to find a ballot drop box for early voting. Acts of passion, of creativity, of courage, of tenacity. We’ve witnessed all of these as perhaps we’ve never witnessed them before.

That’s the theory. But now, for the first time since 2000, we have no clear electoral victor on the day after the election – and the prospect of many days, if not weeks or months, of uncertainty in front of us. All made more unbearable by the prospect of partisan, self-serving litigants distorting the animating principles of our judicial system to invalidate – prematurely and without basis – the tabulation of every vote that has been cast.

Instead, for Kresge, three principles are simple, inviolable, incontrovertible.

First and foremost, every vote must be counted. That’s so straightforward that it’s painful to commit to paper.

Second, we have to elevate long-term common good over short-term expediency. The perfectibility of democracy is a long march. Capitulating to immediate political advantage only makes the horizon-line of fair play, decency and equity more distant.

Third, we can use the moment to mend. Our divisions are apparent. Our distrust clear. Our passions red hot. Projecting those qualities over another four years is untenable. Let’s acknowledge our impasse, step back and then step forward. Not by compromising our principles or by denying our fears, but instead by finding things we can work on together that touch people concretely and beneficially. There are scores of possibilities.

That’s exactly what we at Kresge intend to do. We will continue to work with past partners – and identify new and unexpected ones – who embrace the imperative of improving the fundamentals of civil society for all citizens. We have the enormous privilege of being able to lend intellectual resources, make grants, provide investment capital, fortify networks and apply other forms of institutional equity to rebuilding systems that impede opportunity and justice in America’s cities.

We have been doing this work for decades. We start again today. Join us.

What does philanthropy do next?