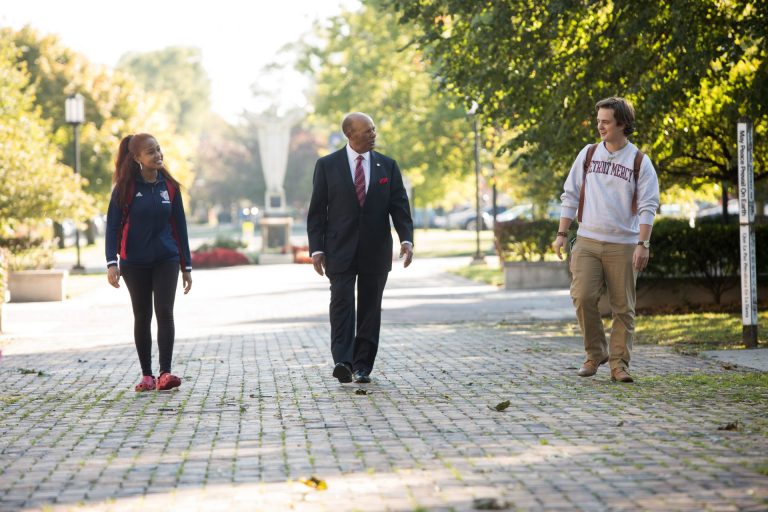 Dr. Garibaldi has presided over a growing student body and ratings of academic excellence.

The recent announcement that Dr. Antoine Garibaldi plans to step down as president of the University of Detroit Mercy next June should remind our community how extraordinary and transformative his leadership has been. Let’s pause and consider just how much we owe him.

Dr. Garibaldi is the 25th president of the university, a post he has held since 2011. Sponsored by the Society of the Jesus (the Jesuits) and the Religious Sisters of Mercy, Detroit Mercy was founded in 1877 as the University of Detroit and consolidated 113 years later with Mercy College of Detroit. It is the state’s largest Catholic university, offering undergraduate, graduate, and professional programs, including architecture, dentistry and law.

Before coming to Detroit, Dr. Garibaldi was the sixth president of Gannon University — with one campus in Erie, Pennsylvania, and one in Florida — where he served for a decade. He’s a native of New Orleans but traveled to Howard University for his undergraduate degree in sociology and to the University of Minnesota in Minneapolis for his Ph.D. in educational psychology. He would return to New Orleans to serve in a series of educational and administrative roles at Xavier University over 14 years.

The strides Detroit Mercy has made during Dr. Garibaldi’s tenure are long and powerful. He has fostered significant increases in enrollment. He has overseen growth in student retention and graduation rates — the University expects a freshman class of 570 students, an increase of more than 20 percent since the start of his service. He set what many believed to be an impossible goal of raising $100 million for the Campaign for University of Detroit Mercy — and exceeded it. He has overseen numerous new building and renovation projects, which have redefined the campus footprint. He has elevated the university’s ratings of academic excellence.

Dr. Garibaldi’s predecessors made the enlightened and courageous decision to have the university remain in Detroit when a distressing array of institutions — religious, educational, business alike — lost faith in the city and chose otherwise. Dr. Garibaldi tripled down on their commitment — with incalculable benefits to the student body, to the faculty, to the surrounding community, and to the city as a whole.

But Dr. Garibaldi broke significantly with his predecessors in engaging the university in new and ambitious ways beyond the campus property lines at the corner of Livernois and McNichols in northwest Detroit.

That drive to engage was foremost in Dr. Garibaldi’s priorities when he asked to meet with me shortly after his arrival in Detroit. His passion in that meeting extended beyond the quest for academic excellence and financial stability that preoccupies most incoming university presidents. He wanted to talk about the Livernois-McNichols neighborhood.

He imagined the university transforming in fundamental ways how it contributed to the neighborhood’s revitalization … through investing in the beautification of the adjacent commercial corridors … through heightened involvement of the School of Architecture’s Detroit Collaborative Design Center in community organizing and project execution … through his own active participation in standing up the neighborhood organization that would come to be known as the Live6 Alliance.

Dr. Garibaldi delivered on each of those aspirations. Some immediately. Some over a longer period.

Particularly memorable for me was standing with him and more than 100 community members on a sunny summer afternoon in 2015 to announce the formation of the Live6 Alliance. Just a very short time after the bankruptcy, a community organization dedicated to neighborhood revitalization was ­— it is hard to imagine today — a novel entity on the landscape of Detroit neighborhoods. That afternoon’s announcement would in many ways presage the expansion of community anchor organizations in Detroit.

With Dr. Garibaldi’s active involvement on the Live6 Alliance board, the organization has demonstrated the value of these anchor organizations as stewards of progress as connective sinew among people, plans, and resources …. as agents of change deeply rooted in the soil of community, uniquely capable of understanding neighborhood strengths, of drawing on historical and cultural identity, of building the musculature of resident-led decision-making.

The alliance is now headed by Dr. Geneva Williams and occupies its own storefront on McNichols, Neighborhood HomeBase. More than a set of offices, Neighborhood HomeBase has also become a community space. And the Alliance is deeply in engaged in a range of activities, from streetscape improvements to new means to connect residents to human services …. from helping corridor businesses stay afloat to moving forward in a time of pandemic.

It’s hard for me to imagine the university without Dr. Garibaldi’s steady, humble and yet expert hand. But he had laid indispensable bedrock in all dimensions on which his successor can build — a legacy of excellence, expansive commitment to community embrace, and servant leadership.

And I take some solace in two things.

First, the university — and the community — will benefit from another 10 months of Dr. Garibaldi’s leadership. We at Kresge intend to take full advantage of that window.

Second, after a year’s sabbatical, Dr. Garibaldi will return to the university as a tenured professor to continue to pursue his interests in research, teaching and scholarship. It is not possible to imagine that he will bring to those roles anything short of his abiding commitment to the Detroit community. I have no doubt that he will continue to inspire us all.

Thank you, Antoine. It has been our deepest privilege to be part of your journey.