CMF panelists address how we should think about climate change, a fundamental challenge of our lifetime 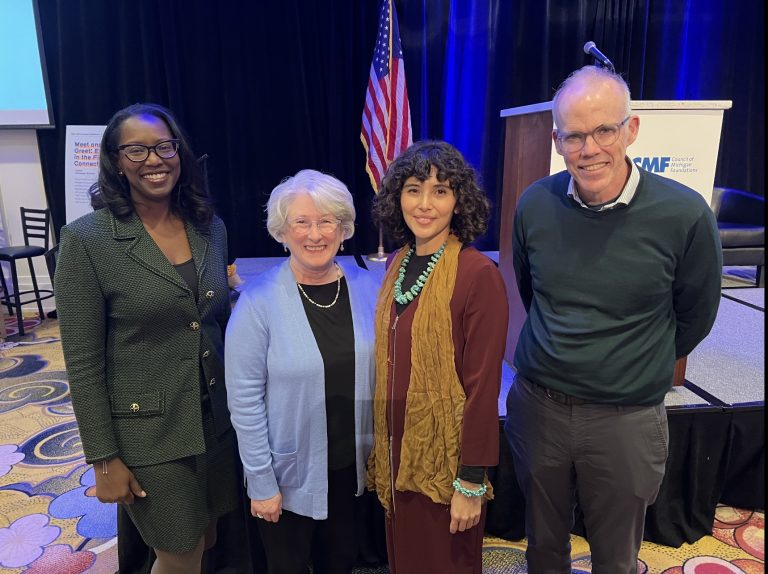 The Council of Michigan Foundation's climate panel featured (from left-right) Jalonne L. White-Newsome of the White House Council on Environmental Quality; Lois DeBacker of Kresge's Environment Program; Michelle Martinez of the Tishman Center for Social Justice and the Environment at the University of Michigan; and Bill McKibben, New York Times bestselling author.

Climate change is not only an environmental issue. It’s an “everything” issue which affects health, mental health, housing, food systems, economic opportunity, human migration patterns, and so much more.

Conveying this message was the main priority of Lois DeBacker, managing director of Kresge’s Environment Program, as she moderated a mainstage panel discussion on climate change and its relationship to racial justice at the Council of Michigan Foundation’s 50th Annual Conference in November.

This was the first time in the history of the CMF conference where climate change was the focus of a plenary session. The panel featured Bill McKibben, New York Times bestselling author; Michelle Martinez, inaugural director of the Tishman Center for Social Justice and the Environment at the University of Michigan; and Jalonne L. White-Newsome, Ph.D., senior director for environmental justice at the White House Council on Environmental Quality. Jalonne is also a Kresge alum who served as a former senior program officer on the Environment Program.

The group’s collective goal was to help CMF members understand that climate change is relevant to all of the other issues they care about.

Bill McKibben reminded the audience that the world has just a little more than seven years to reduce greenhouse gas emissions by 50% if we are to avert the worst impacts of climate change. He likened the effort and innovation required to tackle climate change to the impressive surge in production of tanks and aircraft that allowed the US to win WWII. Setting the stage for the other panelists’ presentations, Bill described climate change as “the biggest moral test we ever faced. The less you did to cause it, the sooner and harder you get hit.”

Michelle Martinez spoke to the collective responsibility that climate change requires. She urged attendees to make bigger and bolder decisions and address structural inequities to step up to the challenge of overcoming the world’s dependence on fossil fuels.

Jalonne White-Newsome pointed out that climate change and environmental injustices disrupt the lives of people. They exacerbate other social and economic stresses that make people’s lives difficult. She touted the Biden Administration’s Justice40 commitment and spoke of the need to intervene to ensure that the billions of dollars in federal investments in climate change, clean energy, and energy efficiency provided through the Inflation Reduction Act reach low-wealth communities and communities of color who historically have been overlooked. And she reminded those in philanthropy that they have a responsibility to work in precisely those places that are the most difficult to work.

Here are several direct quotes from the panelists captured by the CMF:

“For us to do environmental justice work we have to stay connected to real people… to tell us what we’re missing or if we’re headed in the right direction. … We can’t be afraid to go and invest where we may not see the quick wins. My focus is on the communities with the environmental legacy concerns…that’s where we need philanthropy.” ~ Dr. Jalonne White-Newsome.

“The golden rule of climate change is the less you did to cause it, the sooner and harder you are hit. … If we don’t get to work on this now, no one after us will get the opportunity to do the work.” ~ Bill McKibben

“When I say climate change, I say who holds the collective responsibility for these issues and how do we build responsibility into the work we’re doing. … We have to have the structural pieces in place. Investing in democracy, meeting at the table, and understanding what equitable and regulatory policies look like.” ~ Michelle Martinez

Learn more about the Kresge Environment Program’s approach to help cities combat and adapt to climate change while advancing racial and economic equity.

DeBacker: White-Newsome, appointed to White House Council on Environmental Quality, is exactly who our country needs