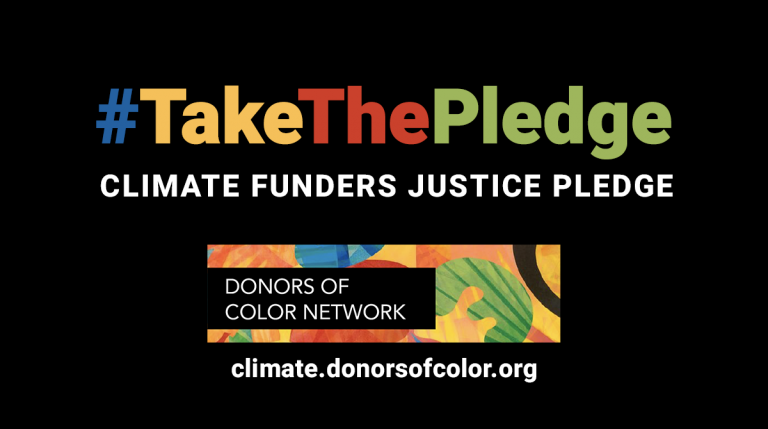 The Kresge Foundation, among the first donors to sign the Climate Funders Justice Pledge, has already reached the 30% threshold in its giving to minority-led groups. ClimateWorks Foundation, Heising-Simons Foundation and Energy Foundation are the latest top 40 funders to join the CFJP.

The Donors of Color Network (DOCN) – the first-ever cross-racial community of donors and movement leaders committed to building the collective power of people of color to achieve racial equity – announced the Climate Funders Justice Pledge (CFJP) has created a new funding baseline for Black, Indigenous, and People of Color led justice groups of nearly $100 million, just one year after the world-changing campaign’s launch.

DOCN also announced this week that three new top 40 funders have joined the CFJP, including ClimateWorks Foundation, Heising-Simons Foundation and Energy Foundation, which are taking the transparency portion of the CFJP. Twenty-nine foundations overall, and 11 in the top 40, have committed to at least one portion of the pledge, but too many funders still remain on the sidelines.

“BIPOC leaders and organizations are the driving force behind some of the most transformative climate solutions in the country – from key policy to grassroots advocacy and everything in between. More equitably resourcing their work is key to winning on climate,” said Isabelle Leighton, Acting Executive Director of Donors of Color Network. “In just one year, we have helped create a new funding baseline of close to $100 million, but it’s not enough. Every foundation who remains silent should step up and take a stand to build a more effective movement.”

A New School Study, in collaboration with Building Equity and Alignment, found that of the $1.34 billion awarded by 12 national environmental funders, only 1.3% goes to BIPOC-led environmental justice groups. The CFJP aims to address that inequity by challenging the nation’s top funders to allocate at least 30% of their U.S. based climate funding to BIPOC-led power building groups and committing to greater transparency by publicly sharing their funding percentage dedicated to such groups.

Top 40 foundations that have signed on to the CFJP so far include: The Kresge Foundation, Pisces Foundation, Schmidt Family Foundation, Rockefeller Brothers Fund, William and Flora Hewlett Foundation, John D. and Catherine T. MacArthur Foundation, Barr Foundation, ClimateWorks Foundation, Energy Foundation, and the Heising-Simons Foundation. Twenty-nine remain silent on their commitments to climate justice; you can track the status of each funder here.

“A climate strategy that doesn’t incorporate and resource the work of BIPOC-led organizations is ineffective and hinders our overall climate response,” said Lois DeBacker, Managing Director of Kresge’s Environment Program. “The Climate Funders Justice Pledge is driving forward a much needed, long overdue shift in U.S.-based climate philanthropy. We took the pledge because we want to lead by example and be a catalyst for that change in service of a winning climate strategy – other funders should follow suit.”

“To win on climate, structural inequities in communities around the world must be addressed. Climate philanthropy can be transformative in advancing solutions that are equitable, inclusive, and just. And understanding where climate funding is being directed is fundamental to identifying gaps and opportunities for action,” said Helen Mountford, President and CEO of ClimateWorks Foundation. “ClimateWorks Foundation is proud to join the Climate Funders Justice Pledge to add to the transparency around climate funding, and we encourage all climate funders to join us.”

The CFJP works in partnership with movement leaders, organizations and networks to provide the philanthropic infrastructure and resources necessary to advance the goals of the movement. In one year, the campaign has enlisted the support of over 70 BIPOC scholars and PHDs, creating the first and only compilation of U.S.-based BIPOC PhDs in the country who are leading on climate policy and research. Engaging the expertise, talent and power of communities and leaders of color is critical to meeting the urgency of the global climate crisis. Funneling the same hundreds of millions into the same organizations each year – groups that largely exclude BIPOC leaders and communities – is not making the progress we need to save our planet and protect communities.

“Latino/a/x frontline environmental justice leaders and organizations have been doing amazing work in their communities with literally ‘pennies on the dollar’ relative to what mainstream legacy environmental organizations have been receiving from funders. Imagine the lives they can change with more equitable funding levels,” said Mark Magana, Founding President and CEO of GreenLatinos. “I am hopeful that when I see the growing number of major environmental and conservation funders taking the Climate Funders Justice Pledge and committing to increase transparency and funding of organizations of color to at least 30% within two years, it will lead to their funding finally matching their public sentiments on racial justice. Philanthropy must now see that this is not just the right thing to do, but it is the strategic thing to do to overcome the climate and environmental crisis in the time we have remaining to do so.”

The CJFP will continue to challenge funders who remain on the sidelines through continued outreach and by leveraging our supporters in philanthropy to encourage more funders to take the pledge. In year two, the CFJP will heavily focus on centering and uplifting the transformative work of BIPOC-led organizations, the impact they make, and how that impact can scale if given a more equitable share of US-based climate funding. For more on the CFJP, please visit: http://climate.donorsofcolor.org/.