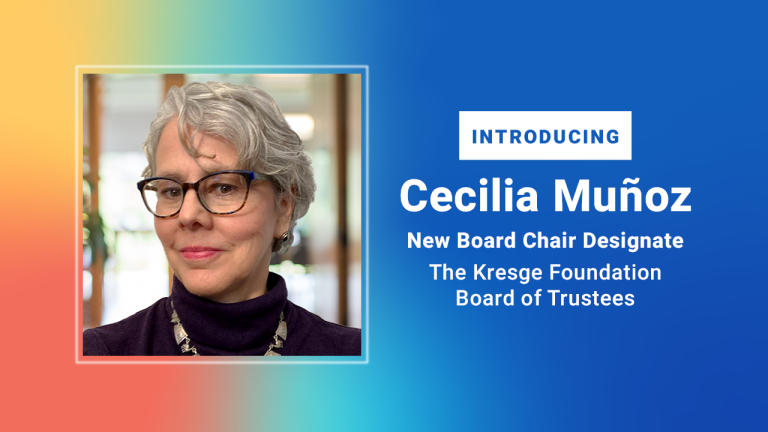 The Kresge Foundation Board of Trustees today announced that Cecilia Muñoz has been elected as the organization’s next board chair, effective March 2022. Muñoz will succeed Elaine Rosen, who will step down from the top position next spring and retire from the board in June after 18 years of dedicated service and leadership.

Muñoz, a national expert on public policy and public interest technology with deep roots in Detroit and in the civil rights movement, joined Kresge’s Board of Trustees in 2017. During her term she will serve as the principal officer of the 14-member board that oversees the $4.5 billion private national philanthropic foundation.

“Cecilia’s exceptional public policy, nonprofit and organizational leadership experience, coupled with a lifelong passion to advocate for equitable social and economic solutions, make her an exciting selection as the next chair of The Kresge Foundation,” said Trustee Cynthia Kresge, who chairs the board’s Nominating and Governance Committee.

“It is very humbling to follow in the footsteps of our extraordinary former board chairs, especially Elaine Rosen and the late Irene Hirano Inouye, and I am greatly honored to assume this role,” Muñoz said. “I have long admired Kresge’s leadership and staff for their deep expertise and commitment to supporting cities and their residents in a way that promotes equitable economic opportunity. And it is very moving to support a vital institution with such deep roots in my hometown.”

Cynthia Kresge also commended Rosen for her nearly two-decades-long commitment to the organization. Rosen joined Kresge’s Board of Trustees in 2003 and has served as board chair since 2007. Under her leadership, the foundation has radically expanded its approach to philanthropy and transformed its grantmaking nationally toward arts and culture, education, environment, health, human services and in the institution’s hometown of Detroit. She also oversaw Kresge’s innovative application of other financial tools and impact investments intended to increase economic and social opportunities. During Rosen’s tenure, the Kresge Board of Trustees has made nearly 7,000 grant and social investment commitments totaling more than $3 billion.

“On behalf of the board, I am grateful to Elaine for her disciplined and skilled leadership through a period of profound but necessary transformation of this institution that my great-grandfather founded nearly 100 years ago,” Kresge said.

“I am incredibly proud of The Kresge Foundation for its impact in America’s cities, and especially in our hometown of Detroit,” Rosen said. “It has been an honor and joy to serve as chair. I will forever be grateful to President and CEO Rip Rapson for his magnificent vision and conscientious execution, and to the exceptional foundation staff.”

A former insurance industry executive, Rosen is the chair of the board of Assurant and a board member of Kforce Inc. and Preble Street. She is a founding trustee of the Foundation for Maine’s Community Colleges and is the past board chair of the University of Southern Maine Foundation and the Greater Portland United Way Foundation.

Muñoz, a metro Detroit native, spent the formative years of her career at the National Council of La Raza (now UNIDOS US), the nation’s largest Latino civil rights organization. In 2000, she earned a MacArthur Foundation “genius grant” for her work on civil rights and immigration.

She served for eight years in the Obama Administration, first as the director of intergovernmental affairs and then as the director of the Domestic Policy Council. In 2020, she resumed federal service to lead domestic and economic policy for the Biden-Harris Transition Team. Following her tenure in the White House, Muñoz joined the think tank New America in 2016 where she helped build the emerging field of public interest technology and currently serves as a senior advisor within the organization.

She is also a senior fellow at Results for America, a nonprofit that advances the use of data and evidence in policymaking, and co-chairs Welcome.US, a platform that helps American residents and businesses support Afghan refugees. In addition, she is a senior advisor to Hyphen, a nonprofit intermediary that facilitates high-impact public-private partnerships to address some of the nation’s greatest challenges.

Muñoz is a board member of AdHoc, a digital services company, a trustee of the Joyce and MacArthur foundations, and serves on advisory boards for the Open Society and JPB foundations. In addition, she serves on the board of several nonprofit organizations including Protect Democracy and Civic Nation.

She is the author of More Than Ready: Be Strong and Be You…and Other Lessons for Women of Color on the Rise, which shares insights from her career and the careers of other notable women of color.