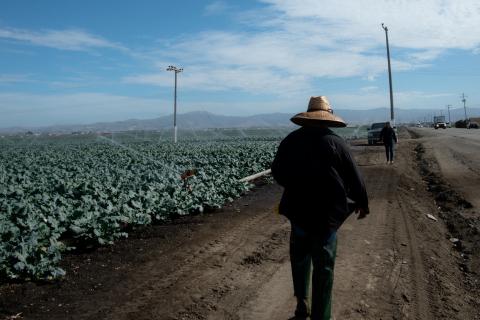 Salinas, California is home to an $8.5 billion farming industry and is one of the most expensive places to live in the U.S. Yet, more than 90,000 farmworkers in the region earn an average of $17,500 per year, according to the U.S. Department of Labor – far below poverty lines.

To examine how farm-working families in Salinas create a home amidst the state’s broader housing crisis, CatchLight Local fellow Sebastian Hidalgo partnered with The Salinas Californian as part of a visual storytelling project titled the CatchLight Local Initiative.

Based in San Francisco, CatchLight works to amplify the voices and stories of populations experiencing structural inequality through visual storytelling by exploring the intersections between art and social justice. The CatchLight Local Initiative connects socially-engaged photographers with local newsrooms and community members to develop stories affecting their communities.

For the 2019 pilot, CatchLight paired three photographers with newsrooms to produce visual stories around economic inequality in the Bay Area, made possible by the Arts & Culture Program’s funding support of the CatchLight Local Visual Storytelling Initiative.

Together with Hidalgo, the program supported Yesica Prado’s partnership with The San Francisco Public Press to profile the experiences of vehicular residents. Titled Driving Home: Surviving the Housing Crisis, this project was published in August 2020 and looks at the culture of vehicular living in the Bay Area. The CatchLight Local program also supported Felix Uribe’s collaboration with the Bay City News Foundation to shed light on the triumphs and hardships of residents living with low incomes.

After only one year, the fellows’ work is already being recognized for shifting conversations about inequity.

In May 2020, Hidalgo, CatchLight and The Salinas Californian recently received a Best of 2019 Award from The Gannett Network in the category of Best Collaborative Journalism. The award was specifically for the CatchLight partnership.

“Through multiple engagement efforts, including bilingual surveys and outreach event(s), they involved farm workers during the reporting process to ensure they were answering their most pressing questions about housing issues,” according to the Gannett award summary. “The final product not only involved a humanistic approach to a crippling policy issue, but also included a list of renters’ rights resources… This partnership set an example for journalists around the world by giving people a voice and telling their stories while also making change in the world to make their situations easier. The ability to do so much for a community of people suffering is what journalism is about.”

The article reached national visibility and was reprinted in a variety of media outlets, including the University of Wisconsin-Madison’s Institute for Research on Poverty newsletter and the United Farm Workers website.

“The Californian newsroom reports that this story was a highwater mark for them – attracting some of the longest engagement rates they have ever seen,” said Erica Garber, director of development at CatchLight.

Not only did Hidalgo and The Salinas Californian team produce award-winning work, their efforts also resulted in direct support to residents.

Using an inclusive reporting process, Hidalgo worked closely with residents and community officials throughout the project, including a trusted local organization, the Alisal Family Resource Center. Hidalgo and project collaborators conducted bilingual surveys and facilitated two free public events – one to launch the project and one immediately following the final publication.

On November 5, 2019, at the launch of the project, Hidalgo and Californian reporter Kate Cimini hosted roughly 40 people for a community conversation at the Alisal Family Resource Center in Salinas. Attendees included local residents, individuals and families facing eviction or housing instability and housing rights activists.

During the event, Hidalgo held a listening circle to hear residents’ concerns, how they wanted or did not want to be portrayed and what information they needed most. Guided by what he learned, Hidalgo set out to develop the visual storytelling project.

Timed with the release of the story on January 22, 2020, Hidalgo and The Salinas Californian team hosted a second community engagement event bringing together even more impacted residents, a city council housing commissioner, a housing attorney, community leaders working to provide farmworkers with aid, education and resources.

The anticipated outcomes of the event included open discussion and dialogue with city decision makers and direct service providers, copies of the newspaper in English and Spanish and a takeaway booklet. Residents were also able to share their stories and concerns, ask questions and access information about renter rights, city assistance programs, what to do if facing eviction and when/where to bring concerns to the city council.

By the end of the night, a mother whose two children tested positive for lead poisoning and was facing eviction sat down with a lawyer. A family who had unsuccessfully been trying to access city support for moving costs was connected to the right department and contact info. A woman concerned about the dangerous conditions of her home, but fearful of eviction, learned where to report problems and how to protect herself by documenting inspections.

“The goal of this concluding engagement event was reporting back to the community following the release of the story and delivering on the needs, questions and concerns that they expressed,” said Garber. “We see this as vital to both creative placemaking aspects of the project – which aims to push toward increased economic equity by first cultivating more open and meaningful relationships between community members, organizations, city officials and artists through visual storytelling –  as well as to increase the sustainability of the program and to ensure that participants can adapt and replicate the model on their own into the future.”

Following publication of the story, the president of The Grower-Shipper Association connected with The Salinas Californian to seek collaboration on housing projects. Another win for CatchLight’s efforts to shed light on residents impacted by the housing crisis.

“If there is one thing that I learned from this project, it would be that the resilience of people and how they create and define ‘home’ will be written into history again and painted on walls …hopefully in more fair housing conditions,” said Hidalgo in a behind-the-scenes interview with CatchLight.

When asked about the role of visual journalism in addressing local issues, such as the housing crisis in Salinas, Hidalgo replied:

“Our role as visual journalists is to document the issues without dehumanizing people and their stories. Photographers have an opportunity to include and engage with the communities they are reporting in – not just on a local level but on a national and international level. Photography is the bridge between local and global conversations like housing. It can be used as a tool to show the facts in creative ways, and also convey the emotion behind them.”

Kresge’s Arts & Culture team began funding CatchLight in December 2018 to support a cohort of socially-engaged photographers exploring the role of arts and culture in combating economic inequality in the Bay Area.

“All too often, when we talk about structural injustice in the United States, we fail to recognize or value the wisdom and strength of people who live out that injustice day in and day out,” said Seth Beattie, senior program officer. “Sebastian Hidalgo, CatchLight and many Kresge Foundation grantees are proving just how different our approaches can be when we center the voices and concerns of residents living with low incomes – and just how powerful arts and culture can be for making that happen.”

“As we work to weave together elements of community organizing, art and journalism in this model, we are seeing some strong early outcomes,” Garber said. “Kresge’s early support for CatchLight Local Initiative has been essential not only in launching the program, but also in attracting new funders. We can’t say thank you enough.”