Benjamin S. Kennedy has been named vice president of Programs at The Kresge Foundation. In this expanded role, Kennedy will support the foundation’s 7 national and place-based grantmaking disciplines. 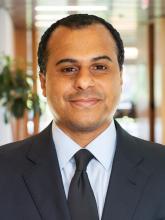 “Benjy has demonstrated throughout his career at Kresge the qualities of compassion, fair-mindedness, integrity, insight and vision that are the prerequisites of a truly gifted leader, said Kresge President and CEO Rip Rapson. We are beyond fortunate to have someone with his talents and temperament leading the rich and complex work that stands at the heart of the foundation.”

Kennedy joined Kresge in 2009 as a special assistant to the president. He went on to serve on the foundation’s Detroit Program and was instrumental in the formation of a new American Cities Program in 2016, which promotes effective and inclusive community development practices in cities across the U.S. He joined Kresge’s 4-member executive team and became a vice president of the foundation in 2019.

A native of Boston, Massachusetts, Kennedy earned an MBA from the Harvard Business School and a bachelor’s degree in economics from Morehouse College in Atlanta, Georgia.