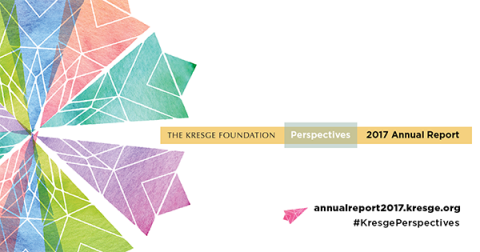 Today we are pleased to debut The Kresge Foundation’s 2017 Annual Report. Entitled “Perspectives,” the report explores the ways in which the foundation is evolving and expanding cross-disciplinary investments and partnerships to address intractable problems and effect social change in America’s cities.

Deploying our resources in flexible mixes to yield the most impactful outcomes – while changing direction as events and developments dictate – was more important than ever in 2017. This was the year when it became clear that institutions and individuals of conscience must articulate their values with force and clarity.

The report puts these values into perspective through several opening letters, affirming the foundation’s commitment to equity, truth, justice and respect for the individual dignity of all people. Among them: a letter from Kresge Board Chair Elaine Rosen about the trustees’ commitment to diversity, equity and inclusion; a letter from Kresge President and CEO Rip Rapson about the evolution of the foundation’s work and the primacy of values; and a letter from Vice President and Chief Program and Strategy Officer Ari Simon, outlining how the foundation has responded to unprecedented challenges through the creation of an Opportunity Fund.

In addition, Health Program Deputy Director Chris Kabel – who promotes and fosters interdisciplinary grantmaking and investment approaches at Kresge – writes about how the foundation’s cross-team work has progressed and expanded. His letter is followed by eight examples of cross-disciplinary collaboration, which lift up the work of each of our program and practice areas and more than 40 grantees and partners.

The book concludes with the vantage points of Kresge’s managing directors, who share their insights about strategy, priorities and accomplishments and what they view to be the most pressing challenges going forward.

To learn more, please have a look at our 2017 report as an interactive website, in PDF format and in book form by emailing the Kresge communications team.