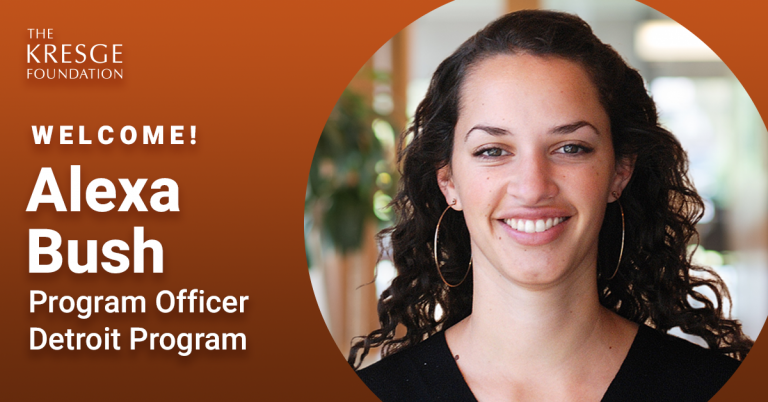 In this role, Bush will guide the implementation of the Detroit Program’s investments in transformative public spaces that have the power to bring people together and promote greater understanding and inclusion. She will also shape Detroit Program strategies that advance the interconnections between sustainable urban development and economic equity.

“Alexa brings a depth of experience in Detroit, a wealth of connections to Detroiters and a passion for forging meaningful change through catalytic projects,” said Jackson. “Her nationally recognized work has profoundly demonstrated the benefits of reimagined public spaces, and we look forward to her joining our team as we deepen our strategies to center the priorities of Detroiters and invest in equitable opportunities for our hometown.”

Bush most recently spent six years with the city of Detroit Planning and Development Department.

As a senior planner and landscape architect her projects included working with the Detroit component of Reimagining the Civic Commons, launched in 2016 as a $40 million investment to revitalize and connect civic assets in Akron, Chicago, Detroit and Memphis (building on a pilot effort in Philadelphia). In conjunction with that, she oversaw the development of Ella Fitzgerald Park and the interconnecting greenways between the campuses of the University of Detroit Mercy and what is now the Marygrove Conservancy in Northwest Detroit.

For the last three years she also served as urban design director for the city’s east region (Council Districts 3 and 4) with a purview including neighborhood planning, parks, public works and public-private partnerships to implement more than $40 million in investments from the Strategic Neighborhood Fund in line with a vision co-created with residents.

Before joining the city of Detroit, Bush worked for Smith Group in Ann Arbor — where she was recognized by the Michigan chapter of the American Society of Landscape Architects for the Edsel and Eleanor Ford House master plan — and was a research fellow for San Francisco Planning and Urban Research Association.

Bush recently laid out some of her thinking about urban transformations in a Medium piece about Reimagining the Civic Commons co-authored with James Hardy, former Deputy Mayor for Integrated Development for the City of Akron. Considering how cities recover from major setbacks — the COVID pandemic being the most recent case — they laid out three principles for effective strategies to leverage public space:

“Parks and public spaces are about more than recreation. They are a necessary part of our infrastructure that contribute to community health, wellbeing, economic development, and equity. By strategically investing in the public realm, cities can find a pathway to equitable economic recovery in the aftermath of the pandemic that will improve their ability to weather future storms,” wrote Bush and Hardy.