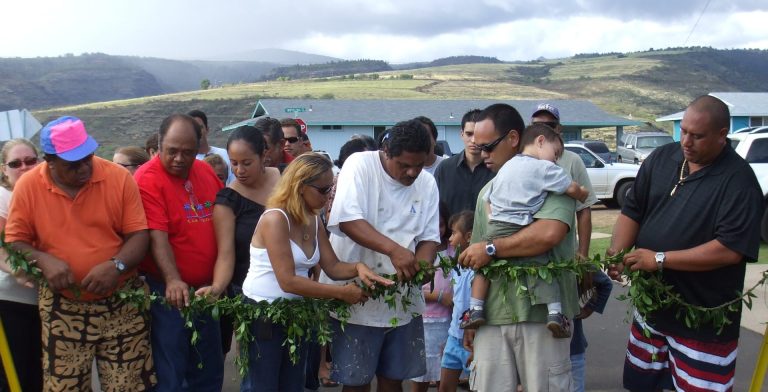 Hawaii is consistently ranked among the nation’s most expensive housing markets thanks to a thriving tourism industry and robust demand from affluent buyers in search of vacation homes. The result is a shortage of affordable housing that disproportionately impacts Native Hawaiians and Pacific Islanders, who represent 10 percent of the state’s population and account for 42 percent of those who are houseless on the islands.

“These are folks who are living on Social Security, if they are lucky, or working, if they are lucky, but aren’t making enough money to live in most of the communities out here,” explains Jeff Gilbreath, executive director of Hawaiian Community Assets, a nonprofit that builds the capacity of low- and moderate-income communities to achieve and sustain economic self-sufficiency, and a member of the Kresge Foundation’s Advancing Health Equity Through Housing cohort of grantees.

To help address the housing shortage, Hawaiian Community Assets has partnered with other local nonprofits and community members to create the Affordable Hawaii for All (AHA) Fellows, a program designed to deepen leadership within the Native Hawaiian and Pacific Islander communities and foster community-driven change in the local housing market. The goal of the program is to “start building a core group of folks impacted most by the lack of affordable housing, ensure they have an equal seat at the table with policymakers, and build their capacity to help lead this movement,” says Gilbreath. There are 10 AHA fellows, some of whom are houseless, all of whom are committed to creating a model for affordable communities built by and for the people who will live there.

“So many times, the term ‘affordable housing’ is thrown around when there is nothing affordable about it. We want to build something that is truly, actually affordable,” says James Pakele, a Native Hawaiian and AHA Fellow who is working with a group of 250 houseless Hawaiians to redevelop the 20-acre parcel of land they purchased in 2020 after establishing a nonprofit organization and successfully fundraising $2 million.

The group had been living on state land, former lands of the Hawaiian Kingdom, for years when they learned of local officials’ plan to “sweep” the area and force the residents to relocate, most of whom had nowhere else to go. “We went to the governor and instead of saying, ‘We need you to fix this,’ we said, ‘We will find the money and put in all the work to fix up this land. We just need you guys to do a few specific things and then let us run with it. And the governor said, ‘okay,’” explains Pakele. He adds, “When that can happen, the plan can really come from the community.’”

Though the project has yet to break ground, it is already serving as a model for other communities, says Gilbreath. “We are talking to other community members on other islands facing sweeps and being criminalized for being houseless. They are starting to show up at the fellows’ trainings asking if they can get involved, so the fellows are recruiting across the islands and picking up steam. We now have representation from across the state, all people fed up that Hawaii is not valuing affordable communities and so they’re taking it on themselves.”

Their work has not gone unnoticed. When COVID hit and the State Legislature organized a working group to create a $100 million rent and mortgage assistance program, “members of our coalition, including some folks directly impacted, were invited to join the working group,” says Gilbreath. “People who have never before engaged with officials, who never got to have a voice, are now talking with business leaders and representatives and senators about how to look at the homeless services providers and break down silos to get families what they need. It has totally changed the dynamic to where now there are state and county officials asking the fellows, ‘What we are missing? Who needs to be in this conversation that maybe isn’t here?’”

As Pakele explains, “I know that I have to interact with government agencies because it is the only way to get a permanent solution. Otherwise, we will continue with this cowboy, piecemeal solution where the state can just decide they are done working on housing and can come in with a bulldozer and force everyone to leave. Our state representative is just one voice in 50. He can only do so much. I have a part in it, too.”