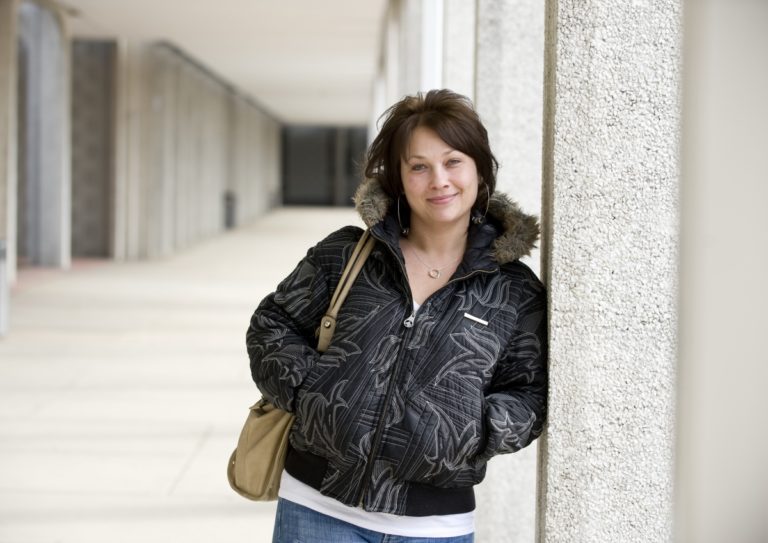 You may say she’s a dreamer, and Cassie Singleton says ‘yes’ and thanks.

Nearing 30, Singleton was a single mother without a high school diploma and real concerns about her future employment prospects. The Detroit area resident knew college was the way to go but feared she couldn’t find her footing so long after leaving high school.

Now at 32, Singleton is a dean’s list student at Macomb Community College driving toward a business degree and career – and her worries about dead-end jobs are in the rearview mirror.

The difference, she says, is Achieving the Dream, a national program that wraps academic arms around students to help them navigate their way to scholastic success.

“That was honestly it,” she says, of the program that helped her with study skills, time management, free intensive tutoring, testing strategies and goal-setting.

There was a time when Singleton could have gotten a chilly reception to higher education.

Look to your left and to your right, the new students often were told: At least one and maybe even two of you will not be around for graduation.

Today, the notion that survival in an academic arena belongs to students who chart their own way to graduation is on its way out. That’s especially true at America’s community colleges.

There’s a challenge to the philosophy that students have the “right to fail,” says Byron McClenney, Achieving the Dream’s national director of leadership.

McClenney underlined the shift in thinking at a recent Achieving the Dream’s 2013 convention in Anaheim, Calif.

Students should expect to succeed, he says. And schools should be rethinking instruction so that students master the courses that have presented hurdles.

There are plenty who stumble along the way.

At present, about half of the students who start community college expecting to earn a degree haven’t met their goal and are no longer enrolled after six years.

That picture must change, say advocates like McClenney: It’s projected that the U.S. will need an additional 800,000 college graduates each year through 2025 to meet the growing needs of the workforce.

Achieving the Dream aims to reverse the troubling trends and increase degree or certificate completion, especially among low-income students and students of color. Kresge’s Education Program has contributed about $7 million since 2007.

Heather Mayernik is Singleton’s Achieving the Dream instructor at Macomb Community College, a two-year institution in suburban Detroit. She says the program gives students the skills, support and confidence to tackle college.

Mayernik has more than 100 students in a three-credit hour “College Success” course. Many, like Singleton, may not have felt they were “college material.”

The program establishes a caring environment, Mayernik says. But there are expectations. “Every student has to take responsibility for their own learning,” she says. “It’s their responsibility to use the services offered.”

It’s been said that the disadvantaged don’t get a second chance, says Bill Moses, who directs Kresge’s Education Program. “But they deserve a second chance and Achieving the Dream is figuring out a way to provide it.” The Education Program aims to increase the number of U.S. college graduates to drive economic prosperity and help low-income and underserved people change the trajectories of their lives.

Math and English are the subjects where many community college students sink.

With open admissions, a large percentage of new community college students – 62 percent in Michigan in the 2010-2011 school year – need some remedial work to tackle college-level material. However, many get stuck in non-credit developmental courses that eat their time, money and patience without progressing into college-level credit course.

For Singleton, who had a shaky math background, success comes through near daily tutoring sessions.

Other approaches make math more relevant to real life situations and avoid an unnecessarily deep dive into the higher math.

The latter has some critics, observes Christopher Baldwin the executive director of the Michigan Center for Student Success. But supporters like Baldwin see the adjustment as a realistic alignment of the studies with the career path. Do all students really need the same math as the aspiring architect or engineer, he asks.

“It has a more real-world focus,” Sawyer says. “It is not dumbed down.”

Other supportive steps include a three-credit course on college success and professional development courses for instructors to work more effectively with at-risk students.

Singleton’s academic adviser, Angela Allen, says the school provides the personal attention. “We can show our newcomers how to become students and navigate the system.”

Grab the chances, Singleton says. “Take it now. Don’t wait. Don’t let the hesitation in your head hold you back.”