$2 million from Kresge supports 17 projects in neighborhoods across Detroit 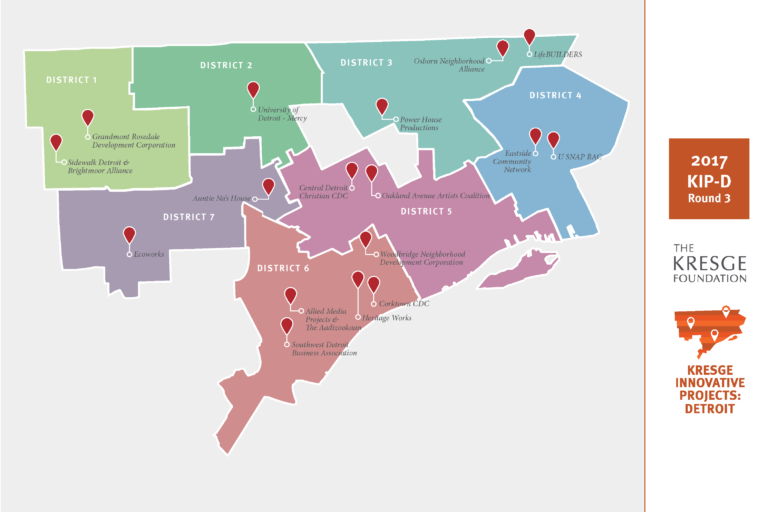 This final round of grants in the Kresge Innovative Projects: Detroit pilot initiative brings its grant total to $5 million since being announced three years ago.

The new grants, reflecting the foundation’s deepening commitment to city neighborhoods, will fund, for example, the creation of a new community hub on Grand River in the Grandmont Rosedale neighborhood and conversion of a blighted five-block stretch of the Morningside neighborhood into an agricultural greenway. The grants support renovation of an abandoned duplex into an art center in central Detroit and a Southwest Detroit program to promote the conversion of vacant second floors of commercial buildings into needed residential spaces.

In addition to the creation of community gathering spots, green spaces and conversion of abandoned properties to new uses, efforts under the Kresge Innovative Projects: Detroit umbrella will make neighborhood streets and sidewalks more walkable, bring artists and community organizations together for collaborations in parks, and engage youth in neighborhood revitalization.

Kresge’s support for these shovel-ready projects ranges from $75,000 to $150,000 in the initiative announced in 2014 as a three-year, $5 million pilot effort to promote visible, positive change across the map of Detroit.

The latest grants were chosen from nearly 70 applications, making for a highly competitive process.

“Kresge’s Detroit Program believes that revitalization of city neighborhoods by and for the needs of residents is the key to Detroit’s continuing revival,” says Wendy Lewis Jackson, managing director of The Kresge Foundation Detroit Program. “Through Kresge Innovative Projects: Detroit we’ve been able to support the imagination and know-how of neighborhood organizations in making transformative changes in the communities that they know better than anyone else.”

“The Detroit-based nonprofits we’ve had the honor of supporting are lighting up the map with positive change. They’re also lighting the way for Kresge to work across the city with a broad spectrum of organizations that engage residents in moving neighborhoods forward,” Jackson said. “What we and our grantees have learned together over the past three years will shape other Kresge neighborhood initiatives to be announced in the near future.”

“Simply put, Kresge Innovative Projects: Detroit is one factor leading us to double down on the neighborhoods of Detroit,” Jackson added.

“Cumulatively, we see these grants adding to the momentum of change in city neighborhoods,” says Jackson. “Change in neighborhoods is taking hold and spreading thanks to groups like those we are recognizing with grants today.

“Our grantees are utilizing what’s been abandoned and left vacant; they are reclaiming city blocks that otherwise would fall prey to dumpers and scrappers; they are creating green infrastructure and new community spaces; and they are developing human capital and community, particularly among young people,” says Jackson.

Kresge Detroit Program officer Bryan Hogle emphasizes that beyond the impact in their neighborhoods, the nonprofits funded by Kresge Innovative Projects: Detroit “are supporting one another by sharing lessons learned, resources and other information at cohort events.”

Although this marks the third and final round of Kresge Innovative Projects: Detroit, Jackson says the Detroit Program will use what has been learned through this pilot initiative to guide the development of future efforts to support the work of Detroit-based nonprofits in driving neighborhood-level transformation. 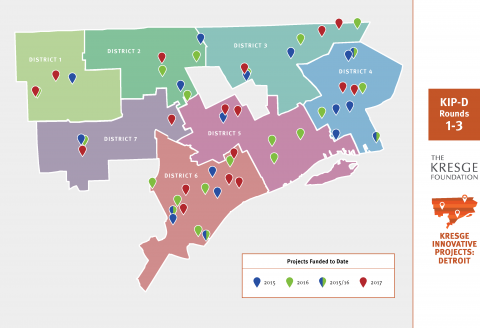 Including 17 announced today, there have been 37 Kresge Innovative Projects: Detroit implement grants; earlier rounds of the initiative included 19 planning grants.

Among the projects completed from the first two rounds of the initiative are the creation of a half-acre market garden and education center at the Penrose Village housing development in Chaldean Town, improvements to the Judge Stein Playfield in Cody-Rouge, the creation of pocket parks with fitness equipment in the Middle Woodward Corridor, renovation of a new home for the Downtown Detroit Boxing Gym Youth Program on the lower eastside and transformation of a vacant lot and commercial building into community gathering spaces in Southwest Detroit.