$1.5 million from Kresge supports 21 projects in neighborhoods across Detroit 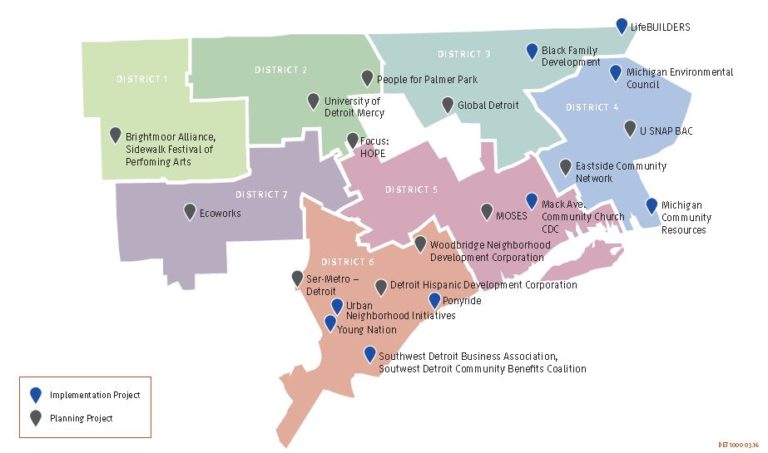 The Kresge Foundation today announced grants totaling $1.5 million to 21 nonprofits for projects or planning efforts to revitalize Detroit neighborhoods. The project and planning grants span the city and include converting abandoned buildings and vacant lots for new purposes, park rehabilitations and engaging high school students in entrepreneurship and revitalization efforts.

The grants are the second round of Kresge Innovative Projects: Detroit, a three-year, $5 million initiative to support nonprofits in transformative neighborhood projects. Nine organizations received grants ranging from $50,000 to $150,000 for projects to be completed in 12-18 months, and 12 organizations received grants of up to $25,000 for an eight-month planning process.

“When we launched this initiative in 2014, we hoped shine a light on positive changes by tapping  into the knowledge and creativity of city residents,” said Wendy Lewis Jackson, Kresge Detroit Program deputy director. “Added to the 18 in the first round of the initiative, these 21 projects are building momentum for change.”

“We see in these grantees a strong desire to revitalize neighborhoods physically and to engage residents socially in the process,” said Jackson. “Our grantees are interested in reutilizing what’s abandoned and vacant, creating green infrastructure and new community spaces, and developing human capital, particularly among young people.”

The 85 proposals for the competitive selection process came from across the city. To ensure a strong pool of proposals for the third and final round of the program next year, this year’s grants emphasized planning projects. The grant selection process required that at least one planning project be embedded in each of Detroit’s seven city council districts.

Through the nine “shovel-ready” implementation grants:

Through the 12 planning grants:

“This past year we’ve seen a number of the first-round implementation projects finished and functioning. Across the city, those include the renovation of new space for the Downtown Boxing Gym Youth Program and the creation of pocket exercise parks in the Middle Woodward Corridor,” said George Jacobsen, Kresge Detroit Program senior officer. 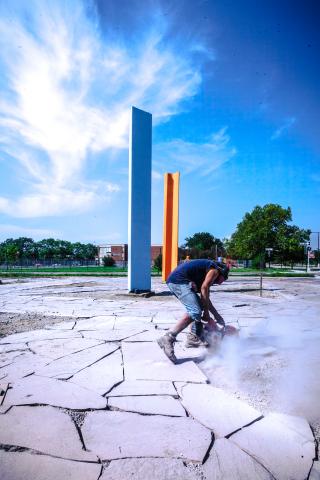 Construction at the site of a 2015 Kresge Innovative Projects: Detroit implementation grant. The organization Heritage Works transformed vacant lots at the intersection of Martin Luther King Jr. and Rosa Parks boulevards in the North Corktown/Briggs neighborhood into a community-centered pocket park that commemorates the lives of the two civil rights leaders.

Jacobsen said other projects like the creation of a green parking lot and the renovation of a blighted two-family flat as an energy-efficient LEED Platinum multiuse facility are still in progress.

“Through the process, we’ve learned from the grantees about what it takes to envision and complete projects of this kind,” Jacobsen said. “At the same time, grantees are developing the organizational muscle to tackle more and more ambitious projects. They’re learning as they go, and we’re trying to help them learn from one another.”

Jacobsen said feedback from the first round influenced the selection process for the second round. He expects more fine-tuning of the process for the third and final year.

Proposals for the third round of Kresge Innovative Projects: Detroit funding will be sought during the fall with grants to be announced in the spring of 2017.