Delivered on June 26, 2019, by Kresge President and CEO Rip Rapson

Thank you for welcoming me and the Kresge Foundation over these last two days. I have been visiting South Africa for some thirteen years, and with each visit, I have the honor and privilege of watching this great country evolve what it means to be a young democracy – with all of the successes and hardships, with all the steps backward and steps forward.

Let me extend our particular appreciation to SAIDE and the Siyaphumelela national advisory committee, who continually champion efforts to improve student success in higher education throughout South Africa. It is deeply gratifying to see those efforts lifted up, celebrated, and strengthened at this conference. The last two days of programming have underscored powerfully that your leadership is making a profound difference in the life of this nation’s young people and the institutions that serve them.

We are also grateful to Karen Stout of Achieving the Dream and Michael Sorrell of Paul Quinn College for traveling here to share their insights. We are proud to call these amazing innovators Kresge grantees.

I. The Kresge Commitment to South Africa 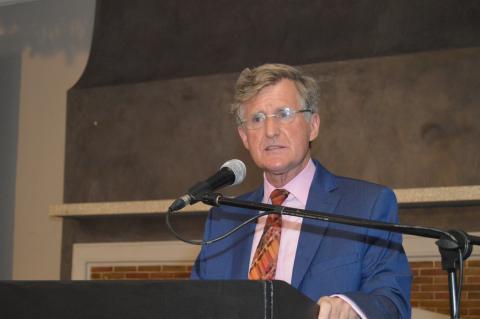 Our commitment to South Africa spans nearly 15 years. Throughout that entire period, it has been led with vision, intelligence, and compassion by Bill Moses. You’ve heard from Bill at yesterday’s opening plenary. His ever-stronger commitment to the cause of postsecondary success in both the United States and South Africa has made Kresge an infinitely more thoughtful and effective organization.  Thank you, Bill.

Permit me to embellish briefly some of Bill’s observations about the Kresge Foundation, with apologies in advance if they are repetitive.

Kresge is driven by the mission to build and strengthen pathways to opportunity for low-income people in American cities. The one exception to that focus is, of course, South Africa.

That exception traces from an overarching belief on our part that our engagement in South Africa is a portal through which Kresge can enter and attach in a small, but meaningful, way to the international order. But the exception is also directly tied to three more specific commonalities between our two countries.

A Beacon of Democracy

First, South Africa’s enduring commitment to stewarding a new democratic order continues to inspire the people of the United States – indeed, of all nations.

This year marks the 25th anniversary of South Africa’s first democratic election. All of you who fought for democracy in your lifetimes know that a healthy democracy is an episodically difficult, sometimes elusive, and always fragile thing. And yet, you have endured on the path. You have interrogated your history in profound and authentic ways to recommit continuously to creating a more perfect union.

Your past several years have been filled to the brim with set-backs and even danger.  But you have conducted another successful free and fair election and delivered a democratically elected president with reformist, forward-thinking ambitions.  It is impossible to overstate our hope not just at Kresge, but throughout American society, that South Africa succeeds.

We like to think that we, in the United States, can also inspire others. A 250-year history of stable, and occasionally – even if not currently – enlightened, self-governance is a momentous accomplishment. But as all of you know, that sense of inspiration is proving harder and harder to cling to, as our nation has become increasingly paralyzed by partisan divides . . .  as we seem to be guided less by principle than by power and ego . . . and as we have replaced a president of transcendent decency and intelligence with  . . . . .  well, let me simply say, with something less than that.  We have a lot to learn from your recent experiences.

Commonalities in our Pursuits of Racial Justice

The second commonality stems from the will and skill your nation has exhibited in confronting directly the legacies of a brutal white supremacy.

This experience is at once completely different from that of the United States. and yet, disturbingly similar. The oppression of slavery and colonialism in both countries. A civil war and Jim Crow segregation in the United States and apartheid and the ensuing struggles in South Africa.

We are two of the most racially diverse nations on earth, with each of us struggling with profoundly deep, intractable inequities. South Africa has been characterized as the world’s most unequal nation, but the United States is the most unequal nation in the OECD.  It is a source of deep and painful self-examination and self-criticism in the United States that – despite our enormous wealth and political affirmations of the continuing power of the American Dream – our poorest citizens are mired in stagnant, debasing poverty, which hardens from generation to generation.

There is a growing recognition in our country that although we have systematically sought to dismantle the most egregious legally-sanctioned manifestations of racism, we continue to be afflicted with deep and pervasive unconscious biases toward, and structural obstacles to, full racial equity and opportunity.  As a result, people of color in the United States lag in every indicator of health and stability – in the accumulation of wealth, in job advancement, in home ownership, in business formations, in educational attainment, and on and on.

So too in South Africa. We accordingly share the challenge of coming to grips with these legacies in a way that neither denies their invidiousness nor constructs impenetrable barriers to progress.

The third commonality is that both nations are struggling to find an equitable path into the next generation of racially-informed growth and economic opportunity.

You went through reconciliation; we have not. We have introduced extensive and innovative city-based assaults on poverty; your cities and townships are early in your search for the most effective strategies. We are just beginning to come to grips with the innumerable ways that globalization and technology are transforming the nature of work; you are at the front-end of excavating the potential of a technological third wave.

Our similarities are powerful, and we stand to learn a great deal from each other about policies, behaviors, and investment patterns of promise.

Let me turn quickly to Kresge’s continuing commitment to the universities of South Africa.

II. Kresge’s Commitment to the Universities of South Africa

There is obviously no shortage of ways an American foundation might try to be helpful in South Africa. Kresge’s focus on student success is a recognition of the transcendent importance of overcoming that challenge in a country whose student population has doubled since the abolition of Apartheid in 1994 and has become increasingly representative of the nation.

Simply stated, the success of South Africa’s democratic experience is inextricably interwoven with the success of next generation South African higher education. South African universities will be a critical driver in stabilizing your democracy . . . growing a future cadre of knowledge workers . . . evolving your national research, entrepreneurship, and innovation muscle . . . building and sustaining a middle-class . . . modernizing your infrastructure . . . and ensuring balanced long-term economic growth.

It’s hard to account progress year-by-year. But through the eyes of an outside visitor, the advancement in your higher education system over the arc of the thirteen years I have been visiting are nothing short of breathtaking. Just a word about that.

Our grantmaking in your country began as a partnership with Inyathelo, which helped eight universities and one teaching hospital double, triple, and in some cases, quadruple private fundraising between 2006 and 2018. This philanthropic giving has helped many South African universities fund new research initiatives, build essential facilities, and provide financial aid to students in need.

But several years ago, our Trustee Phil Clay and I met with the nation’s vice-chancellors and asked whether our support might go beyond support for fundraising. They replied in unison that Kresge should turn its sights to access and success. We took their wise counsel.

The vice chancellors’ advice resonated for the reasons I previously noted – the centrality of student success to the nation’s future. It was also the issue on which our American-based higher education work focuses.

As in South Africa, the United States delivery on the promise of higher education continues to fall short. President Obama gave powerful voice to the belief that our nation’s 21st century competitiveness hinges on improving student outcomes and graduating more low-income and historically disadvantaged students. But the sad reality is that we have not, as a nation politic, summoned the will to do what it will take to accomplish that.

It’s not entirely clear why. The economic benefits of higher education are crystal clear. Americans with an associate’s degree earn more than $250,000 over their lifetimes than people with only a high school diploma; with a bachelor’s degree, that figure rises to more than $1 million.

Similarly, South Africa has the world’s greatest return on investment for a university degree. . . Full stop . . .

And yet, in both the United States and South Africa, about half of all students enrolled in universities won’t graduate, will accrue debt, and will end up with very little to show for their efforts. The reasons are manifold: weak preparation, poverty, outdated institutional policies and, unfortunately, sometimes indifferent campus environments.

But Kresge’s experience in the U.S. suggested that it is possible to build – even if slowly – a better pathway.  Hence, our conviction that the same could be done in South Africa.

Siyaphumelela is the most tangible manifestation of that conviction.

III. The Successes of and Future Path for Siyaphumelela

Among Siyaphumelela’s most noteworthy accomplishments include:

One, the extensive cross-fertilization between South Africa and international leaders in student success, such as Achieving the Dream and Georgia State University;

Three, the participation of many non-grantee universities in Siyaphumelela’s convenings, trainings, and evolving interventions and approaches;

And four, the increasing adoption of data analytics among the Siyaphumelela grantees, laying the foundation for a robust spread of evidence-based decision making on their own campuses and further afield;

These are remarkable successes, including a number we hadn’t anticipated. It is, however, crystal clear from the far-ranging and robust conversations you’ve had over the last two days that these successes are only the beginning.

SAIDE – working closely with grantees and multiple partners (the national Siyaphumelela Advisory Committee, DHET, USAf, CHE, and Kresge and other private donors) – has been working to design the next phase of student success efforts. They – and we – are focused on understanding how best to continue and expand the momentum and success that have made the universities of South Africa among the world’s leaders in this work.

It’s a big challenge, but the outlines of possible responses are coming into clearer focus:

Second, we’ll expand the Siyaphumelela network and the regional leadership nodes led by existing grantees, as well as create a new node in the Western Cape.

This conference is profoundly impressive and inspiring in its assemblage of such high-quality scholarship, innovative thinking, strong institutional leadership, and robust collaborations. And not just because of what it portends for the future of student success. But also because of what it suggests for the South African orientation to the future. There is no question in my mind that South Africa will be bold, will lead with intelligence and compassion, and will continue to show the world that deeply inclusive, just, and respectful change is not only possible, but necessary for the future of our children and our children’s children.

We join with you in deep humility. We are proud to be your partner.

Thank you for listening.