Detroit and the Future of Development Finance

Kresge Foundation President and CEO Rip Rapson discusses lessons learned by the philanthropic sector from Detroit's municipal bankruptcy, and how Kresge is using new ways to support community revitalization, such as social investing and partnering with community development financial institutions.

I. An Introduction to Detroit

Detroit is The Kresge Foundation’s hometown, where we were founded a little more than 90 years ago and have maintained an unwavering commitment ever since.

It is a city whose storied history of innovation and invention, arts and industry has for too long been overshadowed by anguishing accounts of political corruption, by searing images of blight and abandonment so popular among national photo-journalism essays, by apocalyptic predictions of financial meltdown.

So you’re to be forgiven if you arrived expecting a hollowed-out city, a city just waiting for someone to turn out the lights.

If so, I think you’ll be pleasantly surprised. Although it continues to face monumental challenges, Detroit is a city on the doorstep of rebirth and reimagination. The manifestations are ever-clearer:

You may have heard the slogan “Detroit Hustles Harder.” It may be corny, but it’s true. From block club presidents to corporate sector executives, from longtime residents to more recent arrivals, from politicians to philanthropists, there is a shared commitment to unpacking some of urban America’s most intractable challenges and constructing in their place a solution set based on an embrace of risk, a willingness to recalibrate long-term perspective, and an openness to the complexities and promise of collaborative activity.

Community Development Financial Institutions in Detroit have helped shape this emerging climate, contributing in important ways to the city’s rapidly recalibrating trajectory. Before turning to this role, though, let me set some context about how our community had to adjust its ways of working.

II. A Different Way of Working

The decades of disinvestment, deterioration and dysfunction in Detroit presented a constellation of challenges so densely packed and intertwined that our community had no choice but to pursue solutions that sought to be systemic, not atomistic … dynamic, not rigid … nuanced, not ideological … long-term, not episodic … participatory, not hierarchical.

Philanthropy in Detroit was particularly slow to recognize this.  For much of Detroit’s decline, philanthropy was very much a world apart, working on its own timetable, pursuing its own agenda, following its idiosyncratic methods. The independence of our assets secured a sense of remove from fluxes in the economy. A commitment to “neutrality” insulated us against the complex messiness of political decision-making or the annoying complexities of the capital markets.  Our reliance on long-term perspective created a false sense that there was no such thing as “a philanthropic emergency.”

At Kresge, each one of these predispositions has been shattered by Detroit’s recent history. We have come to understand that our role is inextricably linked to the economy, to the political environment, to the urgency of here and now. It was a realization that crystallized for the entire philanthropic community in Detroit’s municipal bankruptcy.

Let me be clear: What we now take for granted – that Detroit could emerge from bankruptcy consensually and in warp-speed – was anything but a certainty two years ago. Indeed, the more-likely-than-not prospect was that the bankruptcy would drag on for a decade, creating the municipal equivalent of The Walking Dead. No ifs, ands, or buts about it – that would have been the city’s death-knell.

These existential stakes explain why The Kresge Foundation and the Ford Foundation made the $100 million-plus anchor contributions to what would become known as the “Grand Bargain” – an $850 million fund that would provide the assets the mediation team needed to crack the bankruptcy.

Much of the attention devoted to the Grand Bargain has focused on its having safeguarded the pensions of municipal retirees and having insulated the collection of the Detroit Institute of Arts against a fire-sale by creditors. Stunning accomplishments both. But its even more profound effect was to provide a pool of assets that the emergency manager and mediation team could use as negotiating leverage with all the creditor classes. The resulting package of negotiated agreements took litigation off the table. The Grand Bargain, in a word, permitted Detroit to get on with the business of community-building.

The Grand Bargain was, in and of itself, a breathtaking act of philanthropic collaboration. But it was not unprecedented. It instead grew out of the rich soil of cooperative action that Detroit philanthropy had been cultivating over the last decade.

We had aggregated $130 million to promote small-business development through the New Economy Initiative. We had layered on one another’s efforts to build a robust arts and cultural ecology. We had created a table called the Detroit Neighborhood Forum in which we met monthly to explore joint neighborhood strategies. We had conceptualized and funded the M1 Rail project as the down payment on a regional transit system. We had pooled capital to invest in residential and commercial development along Woodward Avenue. We had birthed the Detroit Future City Plan to provide a comprehensive framework to convert Detroit’s blighted land to more productive uses.

When we were called to participate in the Grand Bargain, therefore, the collaborative muscle of Detroit’s philanthropic community was already well-defined. We were accustomed to, and comfortable with, embracing risk, working at the intersection of sectors and disciplines, proactively wading into complexity, and utilizing a full spectrum of capital tools.

III. The CDFI Community in Detroit

So what does all of that have to do with the field of community development finance?

I think it means something quite simple: that we at Kresge, together with so many of our most effective peers, are increasingly equipped to contribute to your field’s growth and diversification.

That may be simple, but it’s important. Because the way of working I’ve just described is exactly the way you show up in the world. The devilishly difficult and complex work that the CDFI community undertakes daily – whether jump-starting a business, expanding a charter school, financing a mixed-income housing project, underwriting a community clinic, or boosting college access – is fraught with risk. It demands a form of knowledge, creativity and skill unique to the mission and operating code of your institutions.

The CDFI partners that over the last five years have doubled down on Detroit are illustrative: Invest Detroit; the Detroit Development Fund; Capital Impact Partners; IFF; First Children’s Finance; LISC; and, most recently, the Housing Partnership Network. They entered at the most difficult of times and have taken risks commensurate with the magnitude of the challenges they confronted. Individually and collectively, they have filled a debilitating void with essential skills, expertise, capital, and energy.

Here’s a quick glimpse – and something of a tribute – to just how important this work has been. 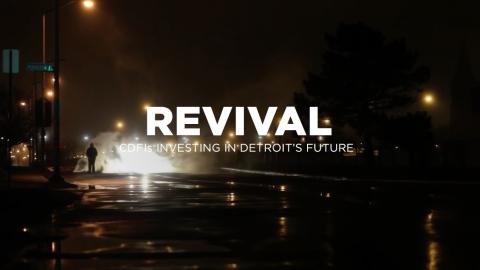 We edited this video to half its original size. That’s how important this work has been and continues to be.

The CDFI community has moved to the front of the house in Detroit. It is inspiring.

Let me conclude by opening the aperture a bit to describe Kresge’s plans beyond Detroit.

In September, Kresge’s Board of Trustees agreed to set aside a dedicated pool of $350 million for the foundation’s social investments. We committed to investing those funds by 2020 and to leveraging $1 billion from other investors. We’ll use grants, loans, guarantees, equity and market rate investments in whatever changing combinations will advance our mission of expanding opportunity for low-income people in America’s cities.

Four principles will help guide this work – all of which are mutually reinforcing.

First, we need to keep in clear view the importance of organizing capital demand, not just capital supply.

Kresge Senior Fellow Robin Hacke has spent the last number of years articulating the importance of creating the machinery and policies necessary for a community to absorb diverse forms of capital. CDFIs are the natural allies of foundations in not simply structuring individual transactions, but also in fostering the ecosystem that supports the development and execution of entire pipelines filled with socially beneficial projects. Robin has worked with ever-larger cohorts of cities and organizational partners to take on some of the tough questions necessary to create that ecology:

It’s fascinating work, with profound implications for the CDFI field.

The second principle is that the nature of the problem has to dictate the configuration of the response.

There is no reason to believe that grants have to be our only recourse when seeking to excavate channels of opportunity. We’ll increasingly seek to identify the underlying drivers of a problem and then reverse-engineer a suite of strategies and tools to confront them.

Deploying a broader range of capital responses enables us to peel away the first layers of risk in transactions otherwise outside the comfort zone of markets. It permits us to partner with investors beyond our conventional networks. It allows us to judiciously move into the public realm to help underwrite the kind of civic infrastructure that generates confidence among private investors that a community possesses the prerequisites of stability and vitality essential to long-term returns.

Third, our deal structures need to be increasingly creative and flexible to draw in partners from all sectors, but without sacrificing quality and impact.

You don’t need me to tell you that the social investment environment is an increasingly fashionable space – populated not just with CDFIs and banks and private philanthropy, but with the public sector, nonprofits, for-profits, retail investors, individuals, interacting in endless permutations. But just as certainly as this unprecedented heat and light will birth and grow countless activities of undeniable social value, so too will it inevitably give rise to ideas and activities that are ill-conceived, wasteful or even harmful.

The people in this room, equipped with deep expertise, a vast reservoir of experience, and a ground wire to the lives of real people in real places, are our first line of defense against misfires, bad judgments and reckless opportunism.  I urge you to help set the bar for institutions like Kresge – or MacArthur or Ford or the Silicon Valley Foundation – to ensure that our collective push toward next-generation innovation is thoughtfully conceived and expertly executed.

Fourth, we need to elevate solutions that sit at the intersections of disciplines.

None of the problems we confront is neatly rooted in a singular set of causes. Our interventions accordingly need to be multifaceted and interbraided.  Poverty, economic mobility, climate change, educational attainment, health disparities or neighborhood stability are not issues to be resolved by isolating neat and tidy dedicated funding streams for housing or human services or health care or transit. Instead, we’re going to have to mud-wrestle the interplay of those systems – conceptually, operationally, financially and politically.

So a piece of good news: Philanthropy has borrowed a page from the CDFI playbook and has begun to move into that terrain. Perhaps nowhere is that more clear than in the pioneering work supported by the Wells Fargo NEXT Awards. But just a couple of additional examples from Kresge’s portfolio:

Let’s make a deal: we’ll keep them coming if you do.