Commencement Address to the University of Detroit Mercy 2019 Graduating Class

Delivered on May 11, 2019, by Kresge President and CEO Rip Rapson

Good afternoon, President Garibaldi, Board Chair McNamara, Trustee Susick, Provost Zarkowski, President’s Council Members, distinguished academic deans, Jesuit and Mercy sponsors, other university leadership, and Valedictorian Mary Payne.  And to the remarkable graduating class of 2019. To all of you, your families and your supporters, congratulations!

Just a word about The Kresge Foundation. 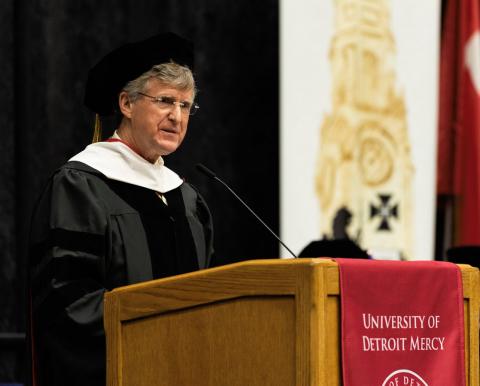 In 1899, Sebastian S. Kresge opened his first five-and-ten-cent store – a revolutionary merchandising idea at the time. It eventually evolved into Kmart. In 1924, Kresge established a private foundation in Detroit with the mandate of “promoting human progress.” That mandate was realized for the first 80 years through the support of fundraising campaigns to help build libraries, lecture halls, recreation centers, art museums, churches and hospitals across the nation. In the past decade, we began to think more expansively about how our foundation could lean more directly into society’s most intractable problems. We have accordingly sought to understand how work in the fields of health, human services, the environment, arts and culture, higher education, and community development can help to ensure that low-income people have full access to economic and social opportunity in America’s cities.

I have a daughter just completing her second year of college, so as I look out at you, I take joy in being reminded that she will not only make it through, but she will do so with purpose, passion and distinction, as you have so impressively done.

In the children’s classic science-fiction story A Wrinkle in Time, Madeleine L'Engle describes a tesseract, a device that permits you to collapse the distance between two far away points in time – as if you were holding a string at both ends with your arms outstretched and then brought those ends together in front of you.

The tesseract makes me think of your trajectory. What if you were to go back to your younger self – say 15 years ago – and try to imagine where you’re sitting today and all the distance in between? Suffering through the endless drama of dealing with your mother or brother or sister or dad ... clawing your way through the hormones and awkwardness that filled up middle school ... navigating the anxieties of getting into college.

And then, college itself: sweating through final exams ... hauling yourself to obnoxiously early classes ... swallowing tough losses on the athletic field or court ... negotiating friendships that were way too complicated.

I don’t know about you, but I would have, all those years ago, been unable to imagine that getting from there to here was possible.

But here you are today, and all those events have molded you into what you are and where you’re headed. Hence, the tesseract – the two points in time reconnecting. Through your determination ... your unwillingness to give up ... your refusal to sacrifice your dreams ... you have transformed the inconceivable into the inevitable.

You have collapsed time to your vision. It is not science fiction. It is your new reality.

And what is truly inevitable is that you are poised to make a difference at a time when our world desperately needs you to do so. 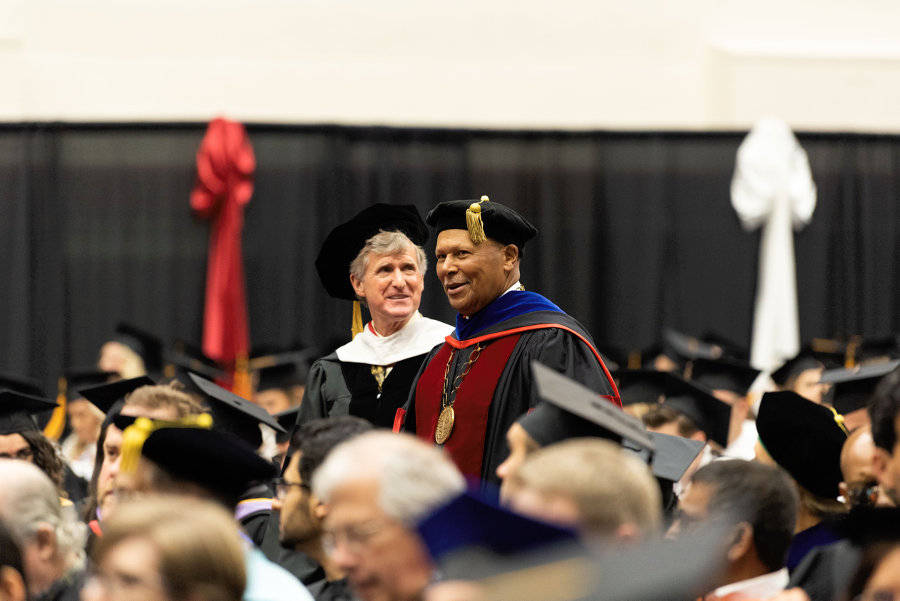 Let’s consider this world for a moment. One where enduring structural racial inequities and injustice impede full opportunity for too many of our citizens ... where changes in climate are swamping our coasts, toasting our cities, and flooding our farms ... where widening political fault-lines breed intolerance, paralysis and division  ... where the idea of civil civic discourse has become a quaint, idle fancy ... where we seem impotent to check the power of technology platforms to broadcast and amplify falsehoods, hatred and distrust ... where artificial intelligence is walking into every workplace in America, checking out whose job is next to go.

I know that sounds daunting and too terrible to contemplate on a joyous day like today. But it doesn’t need to be.

The only way to enter this world, in my view, is to be armed with clear, unshakeable values that activate in the presence of challenges like these. That sounds a bit generic, I realize. But let’s focus the proposition by viewing it through the lens of the education you’ve received at the University of Detroit Mercy.

This university is deeply grounded in the meaning of citizenship – of living in fair and just relationship to others. The institution itself stands as a beacon of that value, reflecting through its administrators, faculty, staff and – most importantly – its students, a commitment to ethical action that carries well beyond its campus.

You have given meaning to and valorized the university’s principles of leadership, service, and community. Whether by engaging in deep scholarship with trusted faculty ... or volunteering at one of the university’s health or counseling clinics ... or helping high school students prepare for college ...  or joining hands with city residents to beautify and strengthen the Livernois-McNichols neighborhood.

You and your classmates have cast in bright relief the power and reward of what the journalist and ethicist David Brooks has termed the “radical mutuality of service” – to your institution ... to one another ... to the city of which you are a part. And the nature of that value – that commitment – is such that it will follow you – no, propel you – as you build careers, families and lives of community engagement.

I want to underscore just how powerfully the university’s value of citizenship has contributed to the renewal of Detroit – through the enhancement of neighborhood resilience ... the affirmation of community identity ... and the acceleration of economic opportunity. And this while the city fought through a crisis of political corruption ... weathered an economic maelstrom ... and endured a nightmarish bankruptcy.

That value of citizenship has helped put in place the building blocks of an equitable, broad-based recovery that is spreading from the commercial corridors of downtown to the front porches and storefronts of this neighborhood.

Just consider, that within a single mile of this campus: 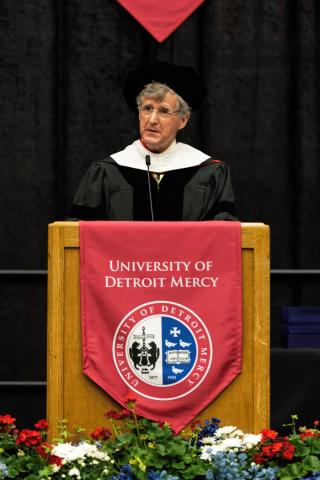 And all of this is being done under the stewardship of the Live6 Alliance, which was formed four years ago on this very site, with Dr. Garibaldi taking the lead role as chairman. His work has cast in bright relief the university’s commitment of thought, time, and treasure to being a full and disciplined partner in the community’s revitalization.

Service becomes a moral act of leadership. It puts values into action.

But I want to also suggest that undergirding the broad value of citizenship – the wide arc of radical mutuality – is a set of even more foundational values. Values that create a moral gyroscope that prevents us from toppling over into ethical incoherence. Values that compel you to look inward to excavate the bedrock of what you stand for ... what you dream ... what decisions you will make along your life-path.

So, let me offer a hypothesis of what some of those are:

Armed with these values, you can demand a workplace ... a government ... a civil society ... as good and just as those people within it deserve.

Because we can make progress both big and small when we have a big tent – a tent that is inclusive of all our colors and beliefs and experiences ... a tent in which communities can secure the tools they need to fashion their own path ...  a tent in which leadership is distributed among the public, the private, the nonprofit, the philanthropic and the civic sectors according to their strengths ...  a tent in which leadership is defined less by power and position and more by care, compassion and community connection.

For the skeptics out there, let me suggest that we know this can be true. It isn’t always, but it can be. ... It should be.

In my lifetime, even if not in yours, consider the power of values-based change that led to breaking the despicable vice-grip of apartheid in South Africa ...  to forging peace after a century of horrific bloodletting between Protestants and Catholics in Northern Ireland ... to tearing down the Berlin Wall to unify two previously irreconcilable systems of government.

Each of these momentous advances was fueled by values – equal justice, self-determination, religious tolerance, human dignity. And these are the values that will fuel your change as well.

Although he was a Trappist and not a Jesuit, the theologian and scholar Thomas Merton once said: “The biggest human temptation is to settle for too little.”

So, don’t. Carry those values forged during your time here into the world to make the change you dream of. Accept nothing less. I think you will find that you can build something genuinely important ... something that can endure ... something that recirculates your values into the shared water-system of a radical mutuality.

Let me make a down payment on our thanks to you all for what you will accomplish. You will make our world a better place.  I know you will. Thank you.

And congratulations on this very special day!