A house of worship and then a soup kitchen, South Park Calvary United Presbyterian Church had been a focal point for the Lincoln Park neighborhood of Newark, N.J., for some 160 years. A fire in 1992 destroyed much of the building, leaving only the facade standing. 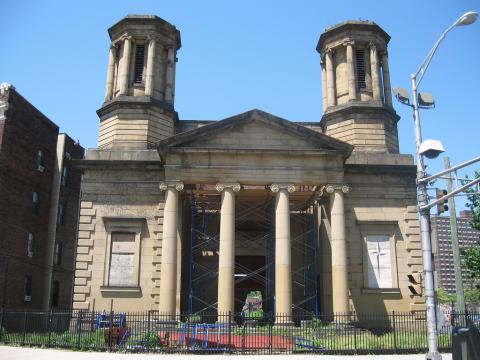 A fire in 1992 destroyed much of the South Park Calvary United Presbyterian Church in Newark. The remaining façade standing is now at the heart of a community-revitalization effort.

An 11-acre, four-block, low-income neighborhood, Lincoln Park is home to 2,500 people. Thanks to the nonprofit’s efforts, a growing number of residents are emerging artists. The artists enliven the community, says Baye Adofo Wilson, executive director of the Lincoln Park Coast Cultural District.

Restoration of the church’s eight-story Greek revival facade will be completed in 2014, Wilson says. The Lincoln Park Coast Cultural District purchased the property from the city of Newark for $100. 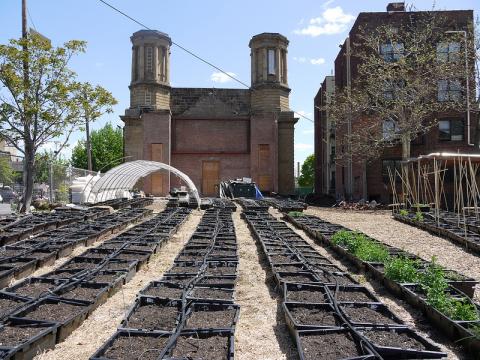 The commmunity farm at the façade is part of an emphasis on integrating agriculture and food production into the community.

The group is building a 600-seat outdoor amphitheater behind the facade for community and cultural events, including the annual Lincoln Park Music Festival, launched in 2006. The weekend festival, which attracted 60,000 people in 2013, features jazz, hip-hop, gospel and house music.

The facade, which is listed on national and state registers of historic places, will be the center of a community built around performances and food, Wilson says. “Our goal is to celebrate the spirit of the community and strengthen the social fabric of the neighborhood.”

Restoration of the facade is supported by a three-year, $712,500 grant from Kresge’s Arts and Culture Program. Kresge works to expand opportunity for low-income people in America’s cities. Its Art and Culture Program seeks to build strong, healthy cities by promoting the integration of arts and culture in community revitalization.The grant also supports general administration, programs and services. 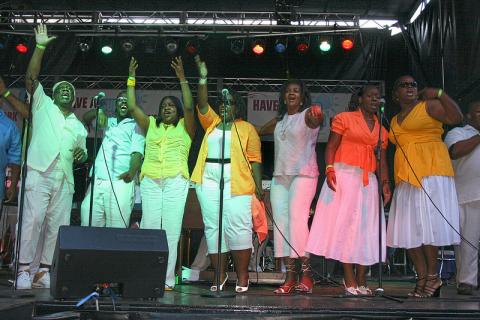 The cultural district’s primary objective is to create a neighborhood that provides economic, cultural and human sustenance. To transform the neighborhood into a green, safe, musically rich place to live and work, it is:

The cultural district is working with Rutgers University to develop an urban farm on the former church property. It sells shares in a community garden, which provides residents access to fresh, locally grown produce. Eventually, Wilson says, produce from the community garden will be sold at concessions connected with the amphitheater. 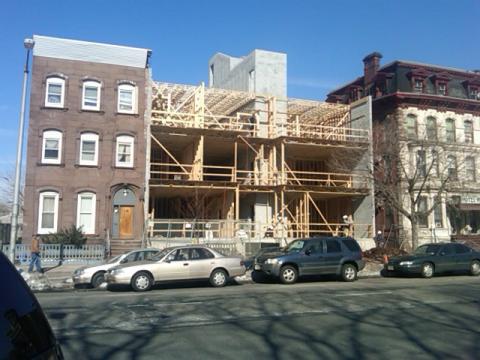 The Lincoln Park Coast Cultural District has built 84 apartments, most with two bedrooms, in 10 buildings.

Lincoln Park Coast Cultural District also builds sustainable, mixed-use housing. It has built 84 apartments, most with two bedrooms, in 10 buildings on a former brownfield. Another four buildings, with 32 units, are planned.

“The Lincoln Park Coast Cultural District is an important grantee in our portfolio,” says Regina Smith, a senior program officer for Kresge’s Arts and Culture Program. “As a hybrid organization, it thinks broadly to address affordable housing, arts and culture, restoration and historic preservation and urban agriculture. It clearly connects to a larger community improvement effort.

“Lincoln Park Coast Cultural District’s commitment to improve the urban infrastructure is compelling and a good fit with Kresge’s ambition to improve the fundamental conditions of America’s cities,” she says.

A lot of people are committed to the community, Wilson says. “They have moved in and claimed ownership.”