More than one-quarter of American households don’t have a mainstream banking relationship, exposing individuals and families to predatory lenders and making it difficult to save for emergencies or build a nest egg.

The odds of being unbanked or underbanked are greater for people living in what the leader of one human services agency in St. Louis, calls “financial institution deserts.” 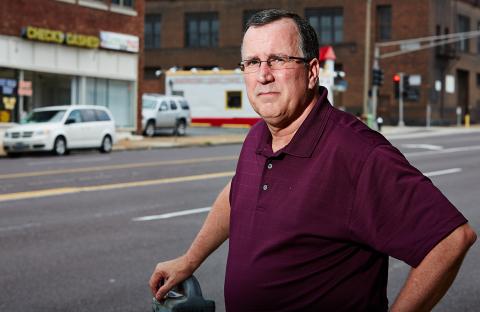 Kingdom House and St. Louis Community Credit Union work together as part of the Financial Capability Partnership Initiative. The initiative is managed by the National Federation of Community Development Credit Unions and the Center for Financial Services Innovation. It promotes healthy financial alternatives for low-income individuals and families.

Funded by a three-year, $1.58 million grant from Kresge’s Human Services Program and a $1.5 million loan the foundation’s Social Investment Practice, the initiative is developing replicable models to connect thousands of clients from diverse social and human service agencies with credit union services.

“One of the most immediate pathways out of poverty is having the ability to manage family resources so people can control their situation and move toward financial prosperity,” says Kresge’s Guillermina Hernandez-Gallegos, managing director of the Human Services Program.

In Chicago, Work First Community Housing Project residents are receiving financial coaching and access to sound financial products, thanks to a partnership between the South Side Community Federal Credit Union and Community Builders, Inc., an affordable housing provider.

A similar partnership in California complements a larger effort by San Francisco Mayor Ed Lee, United Way of the Bay Areaand the Mission Economic Development Agency to cut the area’s poverty rate in half by 2020, notes Hernandez-Gallegos. The Mission SF Community Financial Center and Self-Help Federal Credit Union offer financial coaching and credit union products to low-income 18- to 24 year-olds who are part of a skills-development program that includes college credit and corporate internships.

Unlike banks, credit unions are not-for-profits, owned by members. The 250 community development credit unions that belong to the federation range in size from small faith-based organizations to Suncoast Credit Union in Tampa, Fla., which has more than $5.5 billion in assets and more than 570,000 members.

In all, federation credit unions have roughly $20 billion in community-controlled assets and serve more than 2.8 million residents in low-income communities across the United States.

“The initiative is bringing safe credit-union products to low-income people in the familiar setting of their local social-service provider. This kind of integration helps nonprofits address clients’ financial service needs, and credit unions reach an underserved segment of their community,” says Solomon.

The St. Louis Community Credit Union, with 51,000 members and $230 million in assets, began working with Kingdom House several years ago to make financial education and affordable financial products available to the agency’s clients.

“We had been doing financial literacy with our kids, but if not enforced or practiced at home, they lose most of what is taught. We need to connect the dots, teach and take them to a financial institution to put it into practice,” he says.

The credit union operates mini-branches in Kingdom House and in other social service agencies, making it convenient for clients to receive one-on-one financial counseling and learn about banking services. Kingdom House social workers include financial assessments in their annual client interviews, and one is trained as a personal finance specialist.

A recent St. Louis Community Credit Union sampling of credit scores of 55 Kingdom House clients showed that half had no credit score and only two had a marginal score of more than 600, Walker reports.

One of the biggest obstacles credit unions face when attempting to reach underserved consumers is distrust of mainstream banking services, Woodruff says. Kingdom House, founded in 1902, is a strong partner because of its long history, he says.

“People think they won’t qualify for services. We don’t use credit history to decide if a person gets an account. We give people a second chance, opening the doors to other basic banking services,” says Woodruff. “We’re here to help.”

St. Louis Community Credit Union helps people build a credit history through its Credit Matters Loans, in which the credit union deposits $600 in an account/secured loan. The credit union member repays the loan in $50 increments over 12 months to establish a positive credit history. As payments are made, the principal is released from the secured funds, and the member is able to build his or her savings.

“People have to make payments regularly and be stewards of their resources. We follow up with education so they have the knowledge needed to manage their funds,” Woodruff says.

The credit union will also provide a $500 line of credit. Credit union members can borrow all $500, but receive $450 in cash with a mandatory $50 going into a savings account. Each time they borrow, 10 percent of the borrowed amount is placed in a secured savings account that can be accessed only after the loan is paid off. As their savings grow, members are encouraged to use it for emergencies rather than the line of credit.

Tyria Easterwood recently joined the St. Louis Community Credit Union. “No one coached me as a child about money,” she says. “This gives me a second chance to get my finances together. 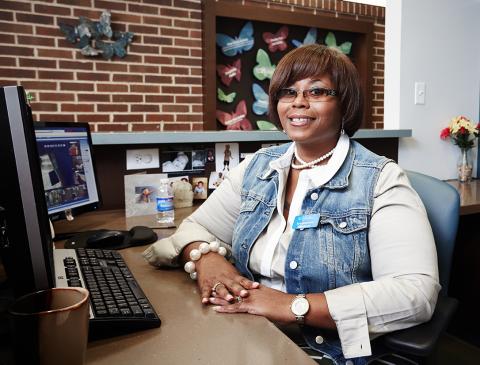 A former day care center worker, Tyria Easterwood is now a receptionist at the human services agency Kingdom House. She recently joined the St. Louis Community Credit Union, which operates mini-branches in Kingdom House and in other social service agencies.

“My working income wasn’t covering my expenses, and I had too much debt,” says the mother of two who has worked at Kingdom House as a receptionist for three years. Easterwood  previously was a teacher assistant in its day care center.

When friends and Kingdom House clients confide that they are struggling financially, Easterwood says, “I tell them how the credit union helped me and that they can change.

“It took me 40 years to understand finances. I’d like to help as many people as I can. It can be hard at the beginning, especially if you have never received coaching, but I tell them we’ll walk through the door together.”

Aligning credit unions and human services should improve the economic security of neighborhoods and communities, says Christine Robinson, a senior program officerat Kresge. “That will go a long way to address poverty in urban America.”