Cisneros: Sharing my immigrant story allowed me to realize the collective power we have

Education Program Fellow Joselin Cisneros is shown speaking during a Coming Out of the Shadows rally, where undocumented immigrant youth “come out” as “undocumented and unafraid.” This annual event was first organized in 2010 by the Immigrant Youth Justice League in Chicago to support a national movement for immigration reform in the United States. 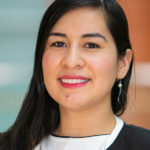 Editor’s note: Kresge’s Equity Task Force and Immigration Learning Group recently partnered to host an internal panel discussion titled “Reframing Immigrant Heritage Month.” The panel included staff who are immigrants, children of immigrants, or those who work on issues related to immigration. Panelists shared the current state of immigration policies, national immigration narratives and what has made those possible. They also shared their personal journeys, the ways in which immigrant experiences have impacted them, and how race, place and privilege play a role in the way they navigate the world. 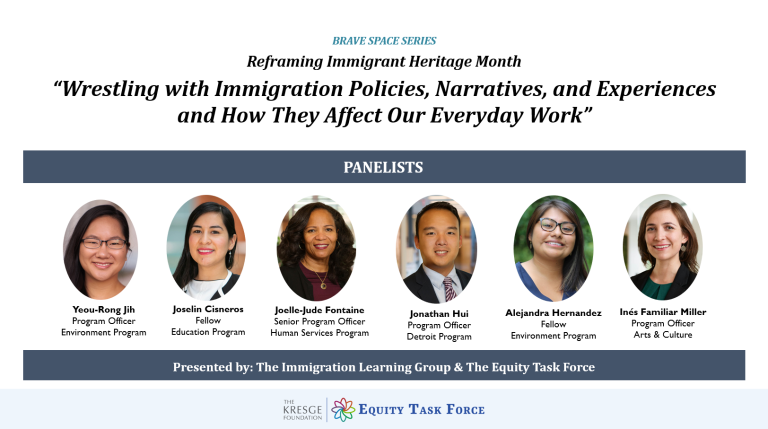 In the commentary below, Education Program Fellow Joselin Cisneros shares her immigration journey.

I was born in Cuernavaca, Morelos in Mexico, and moved to Chicago with my family at the age of 6. My mom made the difficult decision to leave her family and friends, her entire support system in Mexico, to reunite with my dad. My dad had left two years prior because they could barely provide food on the table for my two brothers and me. Leaving Mexico was a very difficult decision for my parents, but they also knew that we would not survive with the little money they were making with my dad working as a taxi driver and my mom selling food.

Although I was only 6 years old when we crossed the United States border, I remember parts of our journey, including getting stopped by an immigration officer who placed us in jail for a day, my older brother carrying me on his shoulders, and the smuggler who helped us cross stealing our luggage. I remember understanding that I was leaving everything, including my friends and my family, but I didn’t quite understand the implications of our move. All I knew was that everything was going to be different.

I did not know that I would be considered an “undocumented immigrant” and that many rights would be stripped from me, or that I would encounter a culture clash. I finally understood what it meant to be an undocumented immigrant when I was unable to apply for a driver’s license; unable to find a job because I did not have a social security number; unable to get health insurance; unable to travel without facing the risk of deportation; and unable to apply for federal or state aid.

At the age of 8, I vividly remember understanding what it meant to be an immigrant when I had to translate documents for my parents from Spanish to English because there was no staff who spoke Spanish.

I was told by my teachers and others that the American dream was achievable if you worked hard enough. So, I decided to work really hard to get excellent grades and got involved after school so that I could be at the top of my class. I even remember getting in trouble with the school custodian because my friends and I stayed too late to study in school. But the reality was that the American dream was not created for everyone.

Although I was accepted to all the institutions of higher education that I applied for, I was unable to afford them because I was ineligible for federal and state aid. Getting to and through college was one of the biggest challenges as I had to fight at every turn. I went to three different institutions until I was finally able to get my degree, but there were many times I wanted to quit. It is no wonder that on average, less than five percent of undocumented students pursue a college degree.

Lessening the burden of undocumented students

Even though being undocumented posed many challenges in my life, it is also what influenced me to become a college advisor to help other undocumented students get to college and lessen their burden.

Being undocumented also influenced me to get involved with other undocumented students in activism from a very young age. I participated in the first National Coming Out of the Shadows Day in 2010, where undocumented immigrant youth ​“came out” as ​“undocumented and unafraid.” It was help in Chicago when I was a freshman in college, and we marched on the streets shouting that we were no longer complacent with being invisible, asking for legislation that would protect the hundreds of undocumented people in this country who had been left in the shadows for too long.

It was the activism of undocumented students throughout the country who put their bodies at risk while doing civil disobedience at the offices of legislators, risking getting arrested and deported, that led to the executive action under President Barack Obama in 2012, called Deferred Action for Childhood Arrivals (DACA). It was through DACA I was able to work as a college advisor and return to Mexico after 20 years.

But it is also because of DACA that I feel my future is always uncertain as it has been threatened several times, especially during Trump’s presidency. DACA has given me many opportunities, but it has also left many people behind since to be eligible, applicants have to be under 31 years of age as of 2012; must have been under 16 when they arrived to the U.S.; must have entered the U.S. before June 15 of 2012; and new DACA recipients are no longer able to apply after Texas challenged it in the court system.

It left behind the student who came to my office while I was a college advisor, who had arrived only one month too late. It was devastating for me to tell him that unfortunately he did not qualify when I had known all the benefits that DACA had afforded me with, including the ability to work, or feeling a small sense of stability since under DACA we are considered “legally present in this country,” or the opportunity to travel back to Mexico.

The joys and pains of being an immigrant

As an immigrant, I have felt the joy of being bilingual, being able to eat both tacos and burgers, and meeting so many wonderful people. But the pain that I feel when there are still many immigrants who continue to be left in the shadows because they did not qualify for DACA, or the many other undocumented immigrants who have no pathway to immigration.

Living in the United States, being undocumented and being an immigrant has shaped and continues to shape my life in many ways. From the way I interact with others, to what I am able to do and not do, the fears I face, but also the great people I have been able to meet as a result of my activism and my passion for education.

Being an immigrant has helped me find my voice and a sense of purpose, especially during the times I have faced imposter syndrome and have been told multiple times that we don’t belong in this country, and to go back where we came from.

It has made me realize that my parents and many other immigrants left their countries due to the history and long list of U.S. policies, like NAFTA, that have impacted the economy and destabilized many countries, like Mexico, and that in fact, we do belong in this country.

Sharing my immigrant story has also allowed me to realize the collective power we all have in our stories, from the similarities to the injustices and racism we face, but also our traditions, foods, and passion for change.